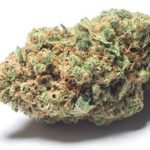 Cannatonic is an even blend of sativa and indica with a 50% Sativa and 50% indica ratio. It’s an effective medical strain high in CBD, which has shown great potential in treating severe seizures and other epilepsy. It is also popular for its low THC content which barely surpasses 7%. It was initially developed by Spanish seed bank Resin Seeds and is a hybrid blend of MK Ultra, an indica, and the legendary G-13 Haze, an indica-dominant hybrid. The focus in creating this strain was to develop a strain that was mostly medicinal by keeping the THC content low. The high, such as it is, is relaxed and uplifting with both mental and physical qualities. As one of the premier medical strains, Cannatonic is often used to treat pain, muscle spasms, anxiety, migraines, and mood disorders. This strain provides a deep feeling of relaxation with uplifting cerebral effects.

The aroma of Cannatonic is unique, starting out earthy and full-bodied, as it melts into hints of citrus. The flavor of the Cannatonic plant is pleasurable with smooth smoke that easily descends down the throat. The buds are beautiful with greenish-yellow hues and bright orange pistils curling and blending amongst the tasty sugar leaves.

Possible side effects include dry mouth, while anxiety and paranoia are less likely. This strain is ideal for both daytime and nighttime use.

Cannatonic is a hybrid blend of MK Ultra, an indica, and the legendary G-13 Haze, an indica-dominant hybrid.

Cannatonic has very low THC content and therefore has minimal psychoactive effects but instead serves as a healing and medicinal strain. It therefore also carries very little negative side effects along with it. In a much milder sense than is the case with most strains, use of cannatonic can result in:

Anxiety and paranoia are very unlikely with this strain but may occur in very rare cases.

Not only does this marijuana strain offer relief for common physical conditions, but it also helps some of the even more serious and debilitating ones such as cerebral palsy and epilepsy. For physical conditions, it may be beneficial to consume more than average of this marijuana strain, especially considering how mild its psychoactive effects are.

An alternative method to smoking can provide greater quantities of CBD into the blood stream, with less of the actual act of consuming necessary. Alternatives include: Edibles, Concentrates, Tinctures, Candies, Gummies, Chocolates, Extracts and capsules.

The terpenes found in Cannatonic give it its characteristic aroma which is earthy and full-bodied, with hints of citrus. They are:

Limonene has the smell of lemons and you expect to find this terpene in most citrus fruits. It is a popular mood enhancer which is ideal for reducing stress and symptoms of depression. It also offers anti fungal and anti bacterial properties.

Caryophyllene gives off a spicy scent with peppery notes. Expect to find this terpene in spices such as oregano, basil and rosemary. It is the only terpene that binds to cannabinoid receptors making it a potent analgesic and anxiolytic agent. Recent research has also shown that this terpene could be helpful in the treatment of alcohol withdrawal symptoms.

This terpene smells of lavenders. It offers a lot of therapeutic benefits which includes: analgesic, antidepressant, anti-epileptic, anti-inflammatory, anti-psychotic, anxiolytic and sedative effects.

This terpene is present also in hops and has a woody smell. It is speculated that this terp has anti proliferative potential.

This terpene smells of pine trees. It is a bronchodilator and may help in relieving symptoms of asthma. It also helps in increasing memory and retention capacity.