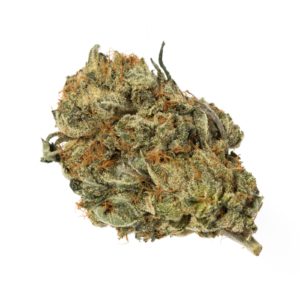 Harlequin GDP is a high cbd cannabis strain that is a cross between the popular Grandaddy Purple and Harlequin strain. Given its lineage, this strain boasts of strong genetics. It has an interesting mix of cannabinoids; with a CBD/THC ratio of 6:5. This makes it a well balanced medicinal strain. The moderate THC amount endears it to new patients who may not be able to tolerate the stoney effects that come with higher THC amounts. The high levels of CBD add a boost to the therapeutic potential of this strain.

The cerebral bang is lucid, making it ideal for a working day. The body hit is relaxing but will not make you couch locked. These gentle effects are great for relieving body aches and curing exhaustion. It is also great for day time use when you need to feel energized and uplifted without feeling overwhelmed.

The buds are nuggy, dense and mint green in color while the leaves have a purple hues. They buds are covered with highly resinous trichomes that make them sticky and hard to break by hand. A blender would be ideal for a home prep. The taste is tropical with a mix of berry and grape tastes. Orange colored pistils add to the aesthetics of the plants.

Harlequin GDP is a cross between Grandaddy Purple and Harlequin strains.

Harlequin GDP combines the relaxing properties of Harlequin strain with the potent indica high of the popular Granddaddy Purple strain; this makes it a well balanced strain. The mind high is ideal for starting off novice users who are not accustomed to stronger hits. The high slowly creeps up on you as soon as you take the first puff. Your mind will be energized and uplifted as euphoria kicks in, but not to the point of getting overpowered. You will still be able to carry out your daily tasks, just with a little less pain and fatigue. As the mind high reaches a plateau the body will begin feeling a deep relaxation that eases away aches and fatigue. Fortunately, you will still be able to move around as usual and go about your daily activities. This makes Harlequin GDP ideal for daytime use.

Harlequin GDP contains moderate amounts of THC. Like with other THC containing strains, it will cause one to have red eyes. There is no need to worry as this should clear out after a couple of hours. Patients have also reported other anticholinergic effects that include dry mouth and dry eyes. This can be sorted out by drinking lots of fluids before you toke.

Harlequin GDP is a balanced strain with moderate amounts of THC and high amounts of CBD up to 6%. This makes it ideal for patients who want to enjoy the full cannabinoid benefits without getting overwhelmed by THC cerebral effects. It is useful in treating pain conditions such as in arthritis, sciatica, musculoskeletal pain and migraines. It also does well in stabilizing the mood. The mind high relieves chronic stress and anxiety and the body hit relieves body aches and fatigue.

Terpenes work synergistically with cannabinoids to potentiate the healing effects of this strain. As much as both compounds have their own therapeutic benefits, they produce a more powerful and longer lasting effect when they are combined. This is referred to as the entourage effect.

Harlequin GDP has a beautiful balance of caryophyllene, myrcene and humulene all of which contribute to the smell it gives off.

The scent of caryophyllene is often described as woody, spicy or peppery. It is the only terpene that is able to interact with cannabinoid receptors. It is mostly helpful as an anti inflammatory agent.

If you have opened a Heineken can, the scent that hit your nostrils is probably that of humulene. This terpene is abundant in hops, a compound used in beer making. It has a woody/ earthy scent. It has shown therapeutic potential in appetite suppression and pain relief. It has also shown anti tumor activity.

This is the terpene that is responsible for most of the musky or skunk like smell that is typical of cannabis. It adds to the pain relieving properties of Harlequin GDP.