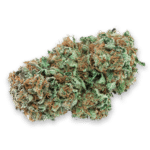 Harlequin is a unique hybrid strain in itself. Often renowned for its usefulness in fighting epilepsy, it has a very impressive 5:2 CBD to THC ratio. This makes it well known as the strain that kills pain while providing just a gentle buzz, and not the harshness of being ‘stoned’ common with most other strains.

Harlequin is well known and renowned for its healing effects and very high CBD content between 8-16%. In comparison, its THC content averages between 4-7%. It produces a very slow and mellow high, with a razor sharp focus, while avoiding the pressure and lightheaded feeling associated with other sativas. Its CBD to THC ratio also means that less patients suffer from the anxiety and paranoia brought about by other strains. The strain provides a feeling of euphoria, albeit a light one. The strain is very useful in cases where users cannot afford to be too compromised emotionally or mentally, especially in situations where they have to work or interact with machines.

The strain was developed at the House of David Collective, by Mr. Green in the early 70s’. It was initially developed to be a hash producing crop, but plans were later squashed after it was discovered that the strain was so much more. The only word that can be used to describe the strain is ‘multinational’, taking its roots from Colombia, Switzerland, Nepal and Thailand. The strain is common in Denver at about half a dozen metro dispensaries. Visually, the strain is similar to the Poison Haze, possessing dense buds with green leaves and a fire red pistil color. Like other strains, it is also covered in trichomes. The strain is resistant to diseases and fungus and can be grown outdoors.

Harlequin is a high CBD-low THC sativa-dominant hybrid with a ratio of about 75% sativa and 25% indica. The strain is known to have three sativa parents namely the Colombian Gold, and the Thai and Swiss Landrace. The remaining 25% of its genetics can be traced to the Nepali Indica strain.

Patients who consume the Harlequin strain of medicinal marijuana have reported both negative and positive effects when using the product. Some common and some rare.

Commonly reported side effects of consuming Harlequin as reported by patients include the following:

Some people regard Harlequin strain to be more like CBD oil because of its low THC content. This is because the strain’s curative effects are not overshadowed by the psychoactive effects that patients feel. And the high CBD content makes it ideal for managing conditions without compromising the abilities of the mind and body, and this makes it appropriate for both daytime and night time use. Patients report the Harlequin strain helps with:

Users often describe Harlequin as having an earthy, lemon and mango scent, with a hint of herbal when burnt and some spiciness in its taste. This unique combination of properties can be traced back to the diverse forms of terpenes present in the strain. The dominating terpenes present in the strain are Alpha-Pinene, Myrecene, and Caryophyllene coming in at 0.309%, 0.298% and 0.238% respectively.

The presence of Alpha-Pinene isn’t surprising, as it is found in higher volumes of sativa and sativa-dominant hybrid plants. It is useful in medicine to treat conditions like anxiety and asthma, while being responsible for the pleasant pine and earthy undertones when sniffed.

Caryophyllene, another dietary cannabinoid present in Harlequin, helps to fight depressive episodes and have long been investigated for its role in mitigating the effects of cancerous cells in the body. Caryophyllene is also known for its anti-inflammatory effects and its role in protecting in the cells lining the digestive tract. It gives Harlequin its spicy and peppery aroma and taste.