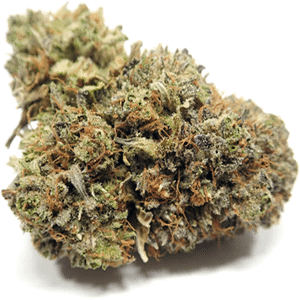 OG Kush is the most famous marijuana strain in California and one of the most popular in the world. OG Kush is believed to be bred from the Chemdawg and Pakistani Kush or another potent Kush marijuana strain. It a nearly balanced hybrid and marijuana enthusiasts believe that it offers the benefits of both sativa and Indica dominant strains. High Times, a New York–based monthly magazine and popular advocate of the legalization of cannabis chose OG Kush as the best marijuana strain. Known for its distinct aroma, unique taste and intense high, OG Kush is an extremely powerful marijuana strain that can’t be compared with any other.

OG Kush comes with a lemon, pine and earth aroma with high content of terpenes such as limonene and pinene. It has high THC levels that can reach 24% and produces intense effects on its users. Some users of this strain report that it gives them a powerful physical and mental buzz of euphoric trance. Some also say they experience energetic buzz after consuming it. This strain is also reported to have a powerful effect on the brain, gradually easing its users into a generalized state of deep relaxation. It is known for its long-lasting cerebral highs that let users mind fly high through the air.

OG Kush I believed to possess exceptional medicinal properties and sufferers of migraines, ADD/ADHD and stress disorders have used the strain to alleviate the symptoms of their conditions. It is an ideal daytime strain that can be consumed anytime without impairing the cognitive abilities of the user and its extreme strength makes it suitable for treating chronic pain, stress, anxiety, insomnia, lack of appetite, migraine and muscle spasms.

Though its origin is relatively unknown and has been a source of debate among marijuana enthusiasts for years, OG Kush is believed to have been taken from Florida to Sothern California where it has benefited from the fresh sea air and fertile land in the early 90s. OG Kush comes with a pine and woody aroma and many believe it’s a cross of Chemdawg and Pakistani Kush with another Kush variety. OG is believed to stand for “Ocean Growth,” because of its coastal roots but some of its enthusiasts believe it means Original Gangster.

OG Kush is an easy plant to grow and it’s suitable for both indoor and outdoor cultivation in warmer climates. OG Kush begins flowering in 7-9 weeks and as it reaches maturity, the dense buds become covered with a blanket of resin. If you grow this strain indoors under the right conditions, the flowering period is usually 8 weeks and if grown outdoors, it’s usually ready for harvest in mid-October. The plant generally reaches a height of 1 meter and comes with an abundance of large green leaves. Growers of this strain can expect an average yield of 500-600g/m² with high THC levels.

The OG Kush strain is known for a lot of positive and negative effects. Outlined below are some of these effects as reported by it users:

Some of the reported positive effects of OG Kush include:

Some of the reported side effects of OG Kush include:

Medicinal marijuana users use this strain to treat a lot of medical conditions. Its extreme strength makes it suitable for treating chronic pain, stress, anxiety, insomnia, lack of appetite, migraine and muscle spasms.

Here are some of the medical conditions OG Kush is reportedly used to suppress: