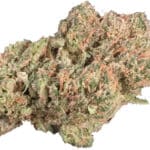 Taffie is a strain made of an evenly balanced combination of Tangie and La Affie strains, hence the name. It is among the most popular hybrid for many users since it is from a family with a 50% Sativa and 50% Indica. The 50/50 hybrid by Crocket Family Farms offers instant effects, which means that you will feel the leaning effects of Taffie that slams into your mind as soon as you exhale. This will be followed by rushing and energizing euphoric effect.

Therefore, the most important property associated with this strain is sparkling mental focus and creativity. Once the high feeling wanes, you are left with a relaxing body high that leaves you physically sedated while your mind flows with artistic vision.

The strain comes with a very herbal and spicy aroma with a sour citrus overtone and increasing pungency as the nugs are burned. It has an herbaceous and tangy-citrus flavor that remains on your tongue for some time.

With the high THC level and potent effects, Taffie is highly recommended for treating conditions such as chronic stress, migraines, depression, appetite loss, and chronic pain. Taffie strain is ideal for both evening and daytime usage.

As mentioned above, Taffie strain is a cross between Tangie and La Affie strains.

Taffie is a strain with a high level of THC and overwhelming well-balanced effects. Besides, it also has a sweet, natural taste that appeals to almost all its users. The bud contains terpenes that offer an uplifting and energetic high rather than a relaxing and sedating high associated with other strains with high THC amounts.
Therefore, Taffie effects leave the user with a relaxed, euphoric feeling without making you feel sleepy. This makes the bud perfect for both daytime and evening use.

Patients have reported the following positive effects with Taffie strain:

Commonly reported side effects of consuming Taffie as reported by patients include the following:

Taffie strain is a hybrid of two strains with high amounts of THC and terpenes. Therefore, the strain has great potential to treat numerous medical conditions.

Patients reported that Taffie was able to treat the following medical conditions:

Terpenes are essential oils that work synergistically with cannabinoids to enhance their effectiveness. The aromatic organic compounds hold numerous medical benefits and strengthen your “high.” Terpenes work together with cannabinoids in the endocannabinoid system (ECS) in the body to modulate and boost the effects of one another. Therefore, terpenes can either decrease or increase the effects of THC as well as other chemicals that interact with the body’s ECS.

Apart from enhancing the effects of cannabinoids in the body and their medical benefits, terpenes give Taffie strain its natural flavor. Taffie strain contains a great balance of terpenes including Caryophyllene, Humulene, Limonene, Myrcene, Terpinolene, Beta-Pinene, Linalool, and Ocimene.

Myrcene is one of the most common terpene in cannabis strains though it is not found in hemp textiles. The terpene has a smell that is similar to cloves. It is a powerful antibiotic, analgesic, and anti-inflammatory. It acts in synergy with THC to increase the psychoactive potential.

Moreover, the terpene blocks the action of aflatoxin B, cytochrome as well as other pro-mutagenic carcinogens. It also offers calming, sedative, antispasmodic and relaxing effect.

Caryophyllene is well known for its spicy flavor and its therapeutic effects. It is an effective remedy for toothache and a local analgesic and anti-inflammatory. Besides, it has anti-fungal properties and selectively activates the CB2 (Cannabinoid 2) receptors.

Limonene is responsible for the typical citrus smell that is found in Taffie strain. This family of terpenes has antibacterial, anticarcinogenic and antifungal properties. It also prevents RAS gene deterioration, which leads to the development of tumors. Therefore, it protects against the carcinogen in the smoke and Aspergillus.

It also increases systolic pressure almost instantly as it easily and quickly penetrates the blood-brain barrier. Thus, Limonene is used to improve mental focus, sex drive, attention, and well-being and sometimes it is used to treat anxiety and depression. It also stimulates the immune system and reduces the unpleasantness of gastric acid.

Pinene is a local antiseptic, anti-inflammatory, and expectorant and bronchodilator. Helps improve the memory as it acts as an inhibitor of Acetylcholinesterase, which prevents the destruction of molecules that transmit information.

This compound has a floral smell that is similar to spring flowers and lavender. It produces a sedative effect and has a calming action, which makes it efficient anxiolytic. It also has anti-epileptic and analgesic properties.