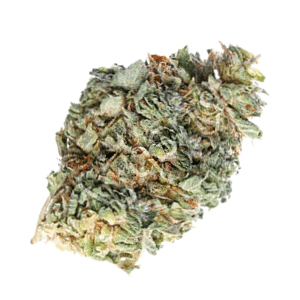 Bubba Kush is an Indica-dominant strain that is known to create intense psychoactive effects. Also known as Bubblegum Kush, this strain comes with one of the highest levels of THC that can reach 27% and induces a deep euphoric high. Bubba Kush comes with a sweet bubblegum aroma and it’s usually only recommended to experienced Indica strain users. Robust, fast growing and powerful, Bubba Kush is the most anxiolytic strain of the Kush family. In most United States dispensaries, Bubba Kush can be found on shelves where they keep their most popular strains with its peculiar purple reflection, orange hairs and flashing resin crystals.

It creates a powerful cerebral effect but without the zone-out gotten by other Kush strains. For recreational marijuana users, Bubba gives them the usual Kush experience and provides a strong and long-lasting sedative effect that is very physical but gives them a pleasant and gradual feeling of happiness and well-being.

Bubba Kush comes with valuable medicinal properties and many medical marijuana users say it’s the perfect hybrid Kush for pain control. It is also used to reduce muscular spasm and relieve stress and anxiety. It is one of the best strains to relieve insomnia, leaving the user’s mind prepared for a deep and needful rest.

Although the origin of this strain remains a mystery, it is believed that it all began with a clone of the Californian OG Kush. It comes with a bubblegum aroma and earthy flavor. Bubba Kush is one of the most used by pharmaceutical companies and companies such as Canopy Growth and Tilray have developed their own strains using selected clones of Bubba Kush.

Bubba Kush is easy to grow and it produces a high yield when cultivated with care. It grows well in both outdoor and indoor environments and has a short flowering period of 60-65 days. When well cared for, Bubba Kush produces great growth results and naturally has a medium height growth with thick flowers and large buds.

The Bubba Kush marijuana strain is known for a lot of positive and negative effects. Here are some of these effects as reported by it users:

Some of the reported positive effects of Bubba Kush include:

Some of the reported side effects of Bubba Kush include:

Bubba Kush is also a medicinal marijuana that is believed to be ideal for the treatment of stress and pains. Some consumers use it in the morning to enhance their mood. Here are some of the medical conditions Bubba Kush is used to alleviate: