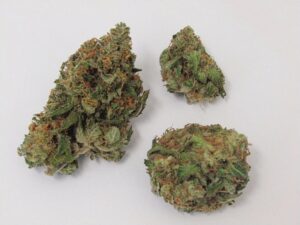 Critical Mass is an indica dominant hybrid strain derived from Afghani land race and Skunk#1. It is the creation of the master breeders Mr Nice seed bank. The name has something to do with the high density of the buds which tend to snap the branches into two as the buds mature. It has moderately high THC levels ranging between 19%-22%. The CBD is about 5%, which is pretty high as compared to other strains. This strain delivers a potent body high that causes sedation. It also gives a potent cerebral hit that will induce euphoria. Expect the effects to last for about three hours.

The plants, like most indica strains are short and dense. The green buds are frosty with resinous trichomes that convey the therapeutic components of the strain. The scent is a mix of earthy with citrus undertones. It also gives off a hint of pine and woody after taste.

The smoke is not noteworthy; it is a dull combination of mild earthy and pine after taste. This strain is ideal for evening use due to the highly sedating effects.

With such THC levels, this strain works well in the management of pain from shingles, fibromyalgia, multiple sclerosis and peripheral neuropathy among others. It is also useful in relieving anxiety, depression and symptoms of PTSD.
The dense buds ensure a bounty harvest. Unfortunately, this strain is predisposed to forming molds which eat into the harvest.

Critical Mass is the creation of the renowned Mr. Nice Seed Bank as their version of Sensi’s big bud. It is a cross between the landrace Afghani strain and Skunk #1. The intention behind this “project” was to utilize the strong genetics from Afghani and Skunk#1 to create a stable strain with a massive yield.

Patients who consume the Critical Mass strain of medicinal marijuana have reported both negative and positive effects when using the product. Some common and some rare.

Critical Mass weed is a very sedating strain. You may consider taking a nap once you toke this strain. It also gives the couch lock effect. with these effects two combined, sleeping cannot be escaped. Other effects to expect include:

As with other cannabis strains with high THC levels, expect to experience the following anti-cholinergic effects:

You can plan to rehydrate in advance so that the side effects are minimized.

This strain has considerable health benefits. First is the treatment of chronic insomnia, this strain will you give you some decent shut eye time that is completely restful. It is also a powerful mood elevator which can help in relieving anxiety and depression. It also has potent anti inflammatory effects. This makes it useful in relieving inflammatory conditions such as arthritis. It is recommended for use in the following conditions:

Critcal Mass has a generous mix of terpenes that give it a rich aroma and enhances the therapeutic potential. The terpenes work together with the cannabinoids and other nutrients to provide a powerful and longe lasting effect, this is known as the entourage effect. It contains a mix of myrcene, limonene, alpha pinene, humulene and camphene.

This is the most abundant terp found in the cannabis plant. It also follows that the skunk like smell associated with cannabis usually comes from myrcene. Most indicas have at least 0.5% of myrcene which is responsible for causing sedation. It is also useful in treating inflammation and easing body aches.

This is the second most abundant terp in the cannabis plant. As the name suggests, it smells of lemons. This terp is a mood improver and also helps in reducing stress. Research has also shown that limonene plays a role in reducing tumor size. Lastly this terp has great anti bacterial and anti fungal properties.

This terpene is abundant in pine trees, as well as cannabis, basil, orange peels and rosemary. It gives of a piney scent. Its main role is in improving airflow to the lungs, this can help in alleviating asthma symptoms. It also has anti inflammatory properties which makes it useful in treating arthritic pain. Lastly, pinene helps in reducing memory loss associated with consuming weed with high THC levels.

It is hard to miss this terp because it gives of a woody scent with spicy undertones. It is abundant in cloves, black pepper, sage as well as cannabis. It has shown anti cancer effects from recent research. It is also useful in suppressing the munchies that come as a result of consuming weed. This is also helpful in sustaining weight loss.

Camphene has a scent that is similar to myrcene. It is mostly beneficial in treating skin inflammation in conditions such as eczema and psoriasis.