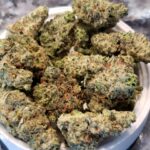 Darth Revan is an indica dominant hybrid strain that is a cross between Obama Kush and the Dawgfather. It was by Alphakronik genes and was released towards the end of 2017 and is part of the Darkside series. As the name suggests, it is associated with the movie Star Wars.

It has high THC content at 26%. It yields 2.5lbs per square meter. The Dark series is associated with high hiol production as well as a heavy presence of terpenes. Thiols have a strong sulfur smell, the pungent smell found in onions, feces, fuel, garlic, and skunk.

Darth Revan is the second release from the Dark series, following Darth Sion. This series is known for its stink or pungent aroma. Darth Revan, however, has some berry undertones that mask the stink to some extent.

Darth Revan, like most indicas, has a short stature and gives high yields. The buds are dense and arranged like popcorns. Thick silver trichomes form a coating on the dark green buds. Bright orange pistils are densely packed between the buds, this is a galactic sight. The flowers are purplish and shaped like pines, the sugary leaves are broad and dark green.

The aroma from this plant is a fir mix of stink and sweet berries. The sweet mostly comes from the Obama genetics while the skunk comes from the Dawgfather lineage. The smoke is flavorful and tantalizing to the taste buds. It will slowly fill your nostrils and lungs. The exhale is smooth and causes little to no throat irritation. It will leave a lingering taste in your mouth. Flavor chasers will this strain. New patients, on the other hand, may take some time before they get past the stink to the berry undertones. With the pungent smell, this is not a strain to take discretely.

Darth Revan has extremely relaxing effects on the body. It also induces sleepiness without over stimulating the brain. It will, however, take some time before this strain knows you out. This means that it works well as an evening strain when you need some hours before needing some shut-eye. The effect of this strain has been described as quintessential, a deeply relaxing yet invigorating strain.

The THC content is high, this makes this strain ideal for stimulating the appetite. It also helps in treating nausea and vomiting. Cancer patients receiving chemotherapy may benefit from this strain. The CBD may be as high as 1%. This adds some medical benefits to this strain.

With THC at 26% and CBD at 1%, Darth Revan is a balanced strain with several medical applications. It has stabilizing effects on the mind and will help in relieving symptoms of mental disorders such as anxiety, depression, and PTSD. It is useful in treating insomnia as well as nausea and vomiting.

This stink strain can be enjoyed by new and old patients alike. The THC may be high for a new patient, so it’s advisable to start with the lowest possible dosage.

This is an indica dominant hybrid strain. It has 26% THC and 1% CBD.

Darth Revan was created by Alphakronik in 2017 as the second member of the Dark series. This series is known for skunkiness.

Darth Revan is a strong indica with powerful effects on the body. The body buzz will induce couch-lock and sleepiness. With high THC, the cerebral hit is smashing; you will feel a forceful pressure pressing against your temples as it fills up through your head. This is followed by overwhelming sensations of relaxation that spreads from the mind and sweeps through the body. Thankfully, the cerebral effects can be tolerated by most patients.

Darth Revan comes with minimal adverse effects. It comes with the common adverse effects associated with most THC strains. They include dry mouth and dry and red eyes. Hydrating yourself adequately may minimize these symptoms. Getting dehydrated may also cause you to have headaches.

On rare occasions, Darth Revan may cause confusion, anxiety, and delirium. This is most likely to occur when a patient is trying this strain for the first time. To avoid this, new patients should start with strains that have minimal THC and give their body time to adjust to THC.

Patients have reported that Darth Revan can treat the following medical conditions:

This is a skunk strain, with some sweet berry undertones. The dominant terpenes are skunky: myrcene and humulene and sweet: linalool.