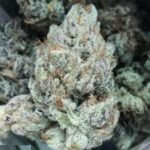 Gelato, a strain often referred to as “Larry Bird”, is a hybrid between the Sunset Sherbet and Thin Mint GSC. It is a slightly balanced hybrid with 56% indica and 44% sativa, and despite the almost balanced percentage of both species, Gelato leans towards an indica high. One of Gelato’s unique features is its high THC content ranging between 20 – 26%, causing an immediate increase in both the energy and mood of its users. It gives a balanced body/head high, bringing relief, loosening tensed up muscles, while still allowing heightened levels of creativity and productivity.

Gelato’s high THC levels gives it the ability to hit users quickly, taking immediate effects after a dose and leaving users with an altered sense of perception. The head rush is countered by the body buzz, leaving users with a unique feeling that discourages intense activity without causing the ‘couch lock’ effect. Some users report an amplified sense of hearing and sensitivity to loud noises after dosing on this strain, with a slight psychedelic effect. Its numbing effects are especially useful for patients dealing with chronic pains, while the elevation of mood effects offer relief from symptoms associated with PTSD and depression.

The Gelato strain is popular along the West Coast as it provides the best qualities of both species, without the adverse effects associated with a pure species. The strain is not recommended for novices due to the high THC content which can bring about intense anxiety and hallucinations. The CBD levels are low as the strain contains a mere .1 percent CBD.

The strain originated from the labs of Cookie Fam Genetics, bred by two popular San Fransisco breeders known as Mr. Sherbinski and Jigga; it is native to the Bay Area in California. The buds of Gelato are usually a dark purple hue with red and orange pistils, and covered in trichomes and resins. Gelato is known to have a strong, pungent but fruity smell which makes it obvious to anybody with a discerning sense of smell.

Gelato is an indica dominant hybrid with about 55% of indica and 45% of sativa. The strain is made from a cross between the Sunset Sherbert and Thin Mint Girl Scout Cookies.

Patients who consume the Gelato strain of medicinal marijuana have reported both negative and positive effects when using the product. Some common and some rare.

Commonly reported side effects of consuming Gelato as reported by patients include the following:

Its balanced high and uplifting cerebral effects makes it ideal for marijuana patients looking for relief from pain and seeking an elevation in their mood without necessarily clouding their sense of judgment. And the strain has become popular and a fan favorite because it doesn’t leave its users sedated, despite having indica-dominant genetics, allowing creativity to flow. Although the positive effects of the strain outweigh the negative effects, the strain is not for everyone due to its high THC content. The low CBD content of the strain also tends to discourage patients of particular conditions, who look for strains with lower THC and a higher CBD content. Patients report the Gelato strain helps with:

Gelato has the fruity appeal of Sunset Sherbert with the earthy, herbal goodness of the Thin Mint strain. The strain is well-known for its appealing, inviting smell, consisting of a fragrant fruity smell with hints of blueberry and orange in its taste. The terpenes present in Gelato include Beta-Caryophyllene at 0.25%, Limonene at 0.27%, Linalool at 0.16%, Alpha-Pinene at 0.13%, Alpha-Humulene at 0.10%, and several others in smaller percentages.

Alpha-Pinene is responsible for the ‘Pine-earthy’ smell of the strain and is known to be responsible for bringing about alertness, and memory retention while counteracting some of the negative effects of THC.

Limonene and Beta-Caryophyllene are responsible for the citrus and woody aroma respectively, and play a major role in helping autoimmune disorders and complications, mood elevation and relieving gastrointestinal complications.

Linalool is responsible for the strain’s ‘sweet’ candy-like taste and is known to relieve symptoms of anxiety while acting as an anti-depressant and anticonvulsant.