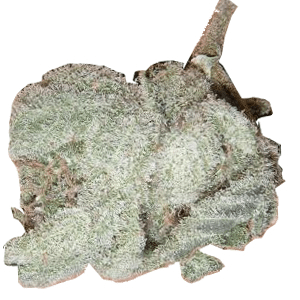 Ghost Rider OG is a hybrid strain bred from the combination of the White and Lucifer OG strains. Known to induce a mental buzz in its users, this strain is highly valued for its balanced cerebral and physical effects. Often described as powerful but not intrusive, Ghost OG has won several awards and enjoys great recognition among consumers. It comes with a strong citrus aroma and medium-sized dense buds that are covered with crystal trichomes. Ghost Rider OG has high levels of THC that can reach 22% and produces a powerful psychoactive effect.

Though it creates an instant high, Ghost Rider OG is an ideal daytime strain that has a short putdown time and doesn’t affect the cognitive abilities of its users. Because of its balanced body and cerebral effects, this strain is very popular among choosy users. Ghost Rider OG is also known to create very pleasant moments of well-being and happiness.

This hybrid is believed to possess high medicinal properties. Some users claim to have used it to combat pain, insomnia and depression. Ghost Rider OG is also known to reduce the symptoms of anxiety, help relax stress patients and improve users’ appetite. Recreational users also enjoy this strain and use it to unwind at the end of a long day.

Ghost Rider OG is believed to be created by Karma Genetics, an Amsterdam-based seed company. Some marijuana enthusiasts also believe that this strain originated from the Afghanistan-Pakistan mountains while other think it comes from the Florida mother plant Triangle Kush. This strain was bred by crossing the White and Lucifer OG strains. It comes with a citrus aroma with a Kush flavor that can quickly fill any room.

Ghost Rider OG can be cultivated successfully in both indoor and outdoor environments. It is a medium height plant and comes with buds that look like a ball and covered in a thick layer of resin. Ghost Rider OG is not resistant to fungi and needs special care to flourish. The flowering of this strain takes about 8 – 11 weeks and produces an average yield mid-October.

The Ghost Rider OG strain is known for a lot of positive and negative effects. Outlined below are some of these effects as reported by it users:

Some of the reported positive effects of Ghost Rider OG include:

Some of the reported side effects of Ghost Rider OG include:

Ghost Rider OG has high medicinal values and it’s a top marijuana strain to reduce stress, anxiety, and depression. Here are some of the medical conditions Ghost Rider OG is reportedly used to suppress: