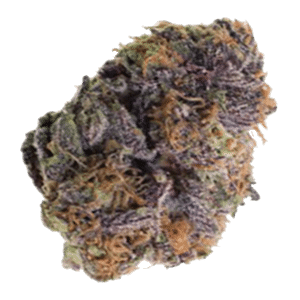 Grape Ape, a strain propagated by Barney’s Farm and Apothecary Genetics, is an Indica dominant hybrid achieved by crossing the hybrid Skunk and the Indica Afghani Landrace with the Mendocino Purps. It is about 80% Indica and 20% Sativa, which gives the strain dominant Indica qualities. It has a THC level in the 15 – 23%, giving it a moderately-high potency.

Despite the average THC content of 16%, it creates a strong body buzz, causing heavy eyes, relaxing the muscles, and creating the popular couch-lock effect making the strain desirable for evening and nighttime use. The strain is also reported to be very helpful in clearing the mind, and battling both anxiety and insomnia. Grape Ape can be used for a range of conditions that deal with pain, and insomnia due to the pain. It provides a double action in cases like this by soothing the pain of the patient, and helping to induce relaxation and sleep.

Grape Ape is well known for its high that comes slowly, eventually leading to a ‘heavy’ feeling in users. This makes the strain suitable for beginners who don’t want the rapid and intense high associated with other strains. The use should also be moderated as it is easy to overdose due to its slow release, leading to disorientation and undesirable symptoms. It is also known to increase appetite in users once the initial high begins to wear, making it useful for patients with wasting conditions like HIV/AIDS, allowing them to put on weight and increase their chances.

The strain is very popular around the Pacific Northwest, created by Bret Bogue of Apothecary Genetics in California, USA. While the plants are short which makes them very suitable for indoor cultivation, the strain can be grown outdoors too as they are resistant to fungus, molds, viruses, and bacteria. The leaves are a tightly bundled pack with dark purplish hues and orange hairs. It’s thick white frosting full of trichomes, pleasant grape, and lavender fragrance also contributes to its popularity and makes for a sniffing delight.

Grape Ape is an Indica-dominant hybrid made up of about 80% Indica and 20% Sativa. The strain is derived from a cross between the Afghani Landrace and the Skunk. There are variations of the strain that includes the Mendocino Purps.

Patients who consume the Grape Ape strain of medicinal marijuana have reported both negative and positive effects when using the product. Some common and some rare.

Commonly reported side effects of consuming Grape Ape as reported by patients include the following:

Grape Ape delivers a body buzz without necessarily overpowering its users, and its full-bodied high delivers the best of both worlds, relaxing the body and the mind. Its slow high also makes it suitable for beginners or people who dislike the harsh curves of other strains. The very attractive berry scent and fruity sweet taste also makes the strain popular amongst patients who prefer a good strain for nighttime use as it also helps them sleep soundly. Patients report the Grape Ape strain helps with:

The strain is well known for its delicious blend of grape berries and herbal aroma which provides a relaxing Indica buzz. They smell of lavender, fruity, oak with a spicy aftertaste. Lab analysis shows a CBD content of 0.2%, with Caryophyllene the most prominent of the terpenes, coming in at 0.82%. Other major terpenes present in the strain include Myrcene at 0.37%, Alpha-Pinene at 0.24% and Humulene at 0.34%, with traces of Linalool, Terpinolene, and Limonene.

The high Myrcene content is typical to Indica strains with the couch-lock effects, responsible for the earthy ‘clove-like’ smell. The Myrcene also helps in reducing chronic pain and inflammation, making it suitable for patients dealing with chemotherapy.

The Caryophyllene present binds to cannabinoid receptors and provides soothing analgesic and anti-anxiety effects, while still providing a spicy and peppery note that most users like.