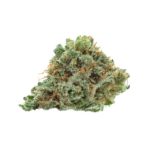 Grimmdica strain derives its weird name from its creators, the Grimm seeds brothers who are of Canadian origin. Grimmdica is a cross between Senshi Hash Plant and good old land race Afghani strain, both parents being strong indica strains. Grimmdica consequently is an indica dominant hybrid strain with 70% indica and 30% sativa. Unlike its parents though, this strain has a potent head buzz that is unlike most indicas.

Grimmdica is a flavorful strain with a mix of earthy, piney and sweet taste.The aroma is diesel like and woody at the same time.

Grimmdica causes sedation as well as euphoria. It is the kind of strain to make you burst into giggles at the slightest provocation. It will also send you to the fridge more often than you expected, because it induces the munchies. The THC levels will be anywhere between 15%- 18%, but some sources say that it may be as high as 26%.

It is a pretty basic strain to grow, requiring little TLC. It does well both indoors and outdoors, giving a yield of about 12 ounces of bud per plant.

With the high THC levels, new patients should go slowly on this strain. It may be useful in offering pain relief as well as stimulating appetite.

This is a hybrid strain that was created by brothers Grim seeds company. They crossed Senshi Hash Plant with landrace Afghani to come up with the Grimmdica strain.

This strain originates from heavy indica strains and it therefore gives strong body effects. However, it also has potent cerebral effects that will cause euphoria. Patients have reported tingling sensations that are well tolerated and bursts of giggles and laughter. Don’t be surprised by these effects as they will soon wear out.

After the cerebral effects set in, the body will start to relax and this may progress to a couch-lock where you feel glued to the seat. It is not a feeling to scare you but rather one to look forward to as it eases away aches and fatigue. However, you may not be able to engage in strenuous activities at this time. These effects will fade out in a few hours.

Patients have reported that Grimmdica can treat the following medical conditions:

While Grimmdica has been used by many patients in the past, it is important to first talk with your physician before starting on this treatment. CBD interacts with other drugs metabolized through the Cytochrome P430 pathway and may cause adverse effects when mixed with other drugs.

The aromas given by cannabis strain can tell you, at least to an extent, what terpenes are present in the strain. This is because erpenes are responsible for the scents of some plants and insects. Recent studies have also shown that terpenes play a key role in boosting the healing effects of cannabinoids such as THC and CBD. One particular study conducted by the Hebrew University of Jerusalem showed that full spectrum extract containing cannabinoids, terpenes as well as other nutrients from the cannabis plant gives a durable and more powerful effect as compared to isolates. So combining terpenes with THC and CBD is in the long run beneficial.

Grimmdica has the following terpenes: humulene, camphene, pinene, and myrcene.

Humulene
This terp is abundant in hops as well as coriander. It has been speculated that humulene has appetite suppressant effects, quite contrary to what the strain offers.

Camphene
Camphene has a woody smell. Studies have shown that it may be useful in lowering bad cholesterol level making this terp cardio-protective.

Pinene
Grimmdica has a scent with piney undertones; this is due to the presence of pinene. Pinene helps in managing symptoms of asthma because it has broncho-dilator properties.

Myrcene
Almost every cannabis strain will have some myrcene which is responsible for the skunk-like smell associated with cannabis. It offers pain relieving as well as anti-inflammatory properties.