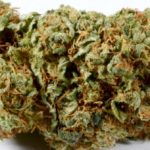 Kosher Kush is an indica dominant hybrid strain that is known for having high THC content. It has THC content of up to 30% and a CBD content of 0/7%. It won the High Times Cannabis Cup in 2010 and 2011; in 2012 it was ranked the best indica strain.

It is believed that this is the only strain that has been “blessed by a Rabbi,” but the legitimacy of this claim is uncertain. Some patients have found a connection to spirituality after taking this strain.

Kosher Kush originated from LA California, and it was originally referred to as Jew Gold. It soon became a top seller in dispensaries and the name was dropped in favor of a more wide-stream name “Kosher Kush.” This name was still connected to the history of the original creators who attached spirituality and humor to the strain.

Being strongly indica, Kosher Kush has powerful effects on the body that will leave you quite sedated. It works well as an evening strain because of the couch-lock effect. Because of this, it can be used to treat insomnia, sleep apnea and chronic fatigue. It is also a good cure for chronic body aches. Unfortunately, the cerebral effects may be over powering for new patients. Having high THC, this strain is great at inducing hunger and causing a cerebral high.

Kosher Kush does well indoors and outdoors as well. It flowers in about ten to eleven weeks and will give modest yields.

The exact lineage of this strain remains a mystery. What is known for sure is that this strain has some relationship with OG Kush. The scent is earthy as well as fruity. The taste is very appealing; it’s rich with earthiness and tropical hints.

Like most indicas, the plants will grow tall and thin. However, this strain has lots of shiny trichromes that coat the buds and orange colored pistils.

Kosher Kush is a highly medicinal strain, no wonder it is a top seller in many cannabis dispensaries.

This is an indica dominant hybrid strain. Unfortunately, the specific ratios of sativa: indica are unknown. It has 29% THC and 0.7% CBD.

As mentioned above, the lineage of this strain is not known. What is known is that this strain originated in Los Angeles. It was later adopted by Reserva Privada who changed the name from Jew Gold to Kosher Kush. Because of the name, most patients associate this strain with spiritual healing.

This is one rejuvenating strain as it gives a strong body hit as well as a potent cerebral buzz. For new users don’t be surprised if you get swept away by euphoria and find yourself bursting into laughter. You may also get hungry and in the mood of snacking on anything available. In no time, the body hit will catch up with you and you may be tempted to take a nap.

Patients have reported that Kosher Kush can treat the following medical conditions:

This indica queen has calming effects that help in alleviating anxiety. It is also a great strain for relieving chronic fatigue and body pains that may occur due to extreme fatigue. The appetite stimulating effects are desirable for patients suffering from nausea and vomiting or general lack of appetite.

Kosher Kush is also effective in relieving neuropathic pain which is otherwise difficult to treat. This is a great relief for patients who have suffered chronically from this kind of pain that they are forced to live with.

Kosher Kush has the following terpenes: caryophyllene, linalool, myrcene, limonene and humulene. This is similar to what is found in other Kush strains such as OG Kush, Kimbo Kush and Bubba Kush. You can pick out myrcene, humulene and linalool easily from the scent given off by this strain. Terpenes add to the therapeutic benefits offered by the cannabinoids. This combined effect is known as the entourage effect and it was first described by scientists from the Hebrew University of Jerusalem. Here are a few benefits offered by each of these terpenes:

Caryophyllene: This terp with spicy notes has structural similarities to humulene. One study showed that this terpene is useful in treating chronic pain.

Linalool: This terp forms part of the building blocks for vitamin E.

Myrcene: study conducted by the University of Coimbra in Portugal showed that myrcene prevents the breakdown of cartilage and this slows down the progression of arthritis.

Limonene: Limonene facilitates the absorption of other terpenes.

Humulene: This musky scented terpene helps in reducing allergic inflammation of the airways.