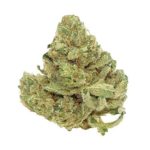 Lazy Lightning is an indica dominant hybrid strain with 60% indica and 40% Sativa. The THC is usually around 22%-25% giving this strain a very powerful mental high that can be dizzying for new patients.

Lazy Lightning is a cross between Headband Loompa and ‘88 G13 x Hashplant, it was created by Bodhi seeds.

The effects of this strain are something close to a lazy lightning effect, a slow start at first before a gush of energy and euphoria kick in. Once the mind starts to feel liberated all paranoid thought will dissipate into thin air leaving you in a carefree state of utopia.

The indica takes a while to set in, this will give you time to make the most of the cerebral buzz. You can engage in creative projects such as art or music. You can also take the time to complete pending tasks or jot down new ideas. For social butterflies, this is the time to enjoy easy talks as you will be chitty chatty and amused at every joke.

The indica moves from the shoulders down to the toes gradually and in waves. You may experience tingling sensations in your extremities that many users find to be pleasurable. When the indica has fully set in you will be glued to the couch, you may also be feeling very hungry and tired at the same time.

Lazy Lightning effects culminate in sleep and so it is better taken in the evening.

Lazy Lightning has small olive green nugs with bright amber hairs and a coating of frosty trichomes. The pistils may spot some pale red amidst orange hues.

The aroma is a mix of spice and lemon while the taste is earthy with tropical accents.

It’s an easy strain to grow in a greenhouse.

Strain Type
This is an indica dominant hybrid strain with 60% indica and 40% Sativa. The THC may be as high as 25% while the CBD is usually less than 1%.

Origin
Lazy Lightning is a cross between Headband Loompa and ‘88 G13 x Hashplant. The breeders are Bodhi Seeds.

Lazy lightning dreamy effects are enjoyed by many patients wanting to escape momentarily from high-pressure thoughts. The indica effects that relax the body completely are also to look forward to.
Lazy Lightning will make you fuzzy at first and finally very sleepy. Taken in the evening there is no better way to wind down from a hectic day.

Lazy Lightning is great at inducing euphoria. It’s also an ideal conversation starter and mood-setter. Generally, it is a very blissful strain.

Patients have reported the following positive effects after taking this strain:

Lazy Lightning can induce some side effects that you can prepare for in advance. One of the common ones is a parched mouth that may get smelly with time. The solution is simple, rehydrate and make use of fresh breath mints.

Red eyes are also a common complaint. This is because THC causes increased blood flow to the eyes. You will have to wait for the THC to clear out of your system. Fortunately, there are no risks associated with this undesirable effect.

Lazy Lightning can cause headaches especially when you fail to hydrate. Some patients have also complained of nervousness and paranoia.

Lazy Lighting is great in managing chronic pain and inflammation. Patients who suffer from joint aches and inflamed arthritis can benefit from this strain.

This strain is also a great stress reliever. The mood uplifting effects help to tackle symptoms of depression that may have persisted for a long while.

For those suffering from chronic insomnia, this strain tackles the problem from different angles. By reducing symptoms that may cause a lack of sleep such as pain, fatigue, or excess worry patients can sleep better. The deeply relaxing effects help the muscle to relax and enable one to wake up feeling refreshed and rejuvenated. THC also causes sedation and promotes non-REM sleep. This further promotes restful sleep.

Patients have used this strain to treat the following conditions:

Lazy Lightning scents are a mix of citrus, herbal, lime and spicy. From this, you can appreciate the presence of myrcene, limonene, and caryophyllene.