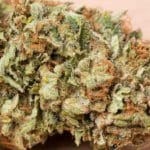 Lemon OG is an indica dominant cannabis strain with 60% indica and 40% sativa. It is also known as Presidential Kush or Lemon OG Kush. Lemon OG has one of the strongest lemon smells that you will find in any strain, this is suggestive of an abundance of limonene. It has high THC levels ranging from 17%-24%. The CBD is very low around 0.1%. It is a cross between Lemon Skunk from Las Vegas and OG Kush. A second variant was created by DNA Genetics in 2004 by crossing the Las Vegas Lemon Skunk with an OG#18 cut. This variant has a super high calyx to leaf ratio and has a strong lemon and diesel smell.

When you open a jar filled with Lemon OG buds the pungent smell of lemons will quickly saturate the atmosphere. Diesel undertones originating from the kush relatives are hard to miss. The predominant color of the buds is pale green which leans towards yellow. The buds are coated in thick trichomes that are whitish orange in color.

With high THC amounts, this strain will definitely induce the munchies. New patients may be taken aback by this unexpected hunger pangs. But for those with low appetite issues, this should come as a good surprise. Lemon OG is also known to have strong sedative properties. The body hit is indica strong and prompts some patients to do nothing more than just recline on the couch.

Fortunately the cerebral buzz will not cause your mind to race, so you can comfortably drift into non-REM sleep. However, some patients have reported feeling very energized by this strain that they have to go out and engage in some physical activity. Generally speaking, you can take this strain in the late afternoon or evening.

Lemon OG does well both indoors and outdoors. Like most indicas, the plants will be short and bushy and will take a short time to flower, around 9 weeks and the yield will be high.

Lemon OG is a cross between Lemon Skunk from Las Vegas and the OG. DNA Genetics have also created a Lemon OG by breeding Lemon Skunk with the OG #18 in the San Fernando Valley. Having been in the market for over ten years this strain has bagged over 50 international awards.

Lemon OG is known for its lemony scent that provides a sense of relaxation. The body hit is also energizing and uplifting. A few patients may get overwhelmed by the cerebral effects, but they should get use to after two or three tries. Most users enjoy the gentle hit to the brain that is prone to increase creativity and sharpen focus. Artists, musicians, composers, and other creatives have used this strain to boost their motivation when having low spirits.

Like with most THC potent strains, Lemon OG especially when consumed in higher doses can cause some side effects.

Taking enough amounts of water before and during your smoking session will help in reducing the negative effects. Moisturizing eye drops may also prove useful.

Lemon OG has the ability to improve mood and reduce symptoms of depression. Some patients with PTSD have also benefited from this strain. Lemon OG works through different mechanisms to stimulate appetite; this can be instrumental in boosting the appetite of cancer patients and HIV/AIDS patients. Patient reported medical benefits of this strain include:

Terpenes are the scent producing compounds in many plants. They also add to the therapeutic properties of the strain. When mixed with cannabinoids such as THC and CBD, the therapeutic effect is magnified, that is why some patients prefer to use full spectrum cannabis.

This terpene’s smell may irritate your nose; it is like smelling into a jar of black pepper. But it is a highly beneficial terpene and the only one that binds to cannabinoid receptors. It is included in most topicals and creams due to its anti inflammatory properties. It has also shown potential in the treatment of alcohol withdrawal symptoms.

This terpene has a sweet smell; it will remind you of fresh lavenders. It has sedative properties as well as anti depressant properties.

This terpene gives off a pungent musky scent; you can pick it up from most cannabis strains. It has has anti inflammatory properties as well as sedating properties.

This terpene is present also in hops and has a woody smell. It is speculated that this terp has anti proliferative potential.