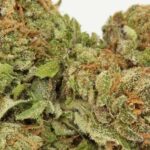 Howard Marks, the cannabis smuggler extraordinaire has a strain in his honor, and it is none other than Mr. Nice. Mr. Nice is an indica dominant hybrid strain with a luscious taste and a fierce body melt and a luscious taste. It is 80% Indica and 20% Sativa; this makes it very much Indica leaning as you can tell from the compact buds and short stature.

Mr. Nice was bred by Sensi Seeds, master breeders with over 60 hybrid strains to boot. In the 80s, Mr. Nice was released as a limited edition strain and back then it was known as “G13 x HP.” The strain is a cross between the phenomenal government strain G13 and Sensi seed’s Hash Plant strain. In 1999, Sensi Seeds released the strain into the market from whence it has made a name for itself. In 2004, Mr. Nice took 2nd place in the High Life Cup. It has 13%-16% THC and 1% CBD.

When you open a jar of Mr. Nice’s buds, the aroma that will rise to greet you is typical of marijuana, nothing out of the norm. Mr. Nice has a strong musky scent with some piney and woody undertones. What may catch you off guard is the tiny bits of sweetness that you may find when you take a long inhale.

The effects of Mr. Nice set in slowly but once they arrive they come with a bang! Be warned that Mr. Nice is a lazy strain that can sap your motivation for doing anything constructive. This world best when you medicate on this strain in the evening when you can afford to sleep. People struggling with insomnia can hop onto this benefit as Mr. Nice is sure to give you some quality shut-eye. Being a strong Indica, patients turn to this strain mostly to wade off insomnia and treat chronic fatigue and exhaustion. Patients have also used this strain for glaucoma, nausea and vomiting, and arthritis.

Mr. Nice will come with a few side effects such as dry mouth and eyes, but the positive effects far outweigh the negatives.

This strain is not great for beginners as it requires a lot of attention. Over time, it gets easier to grow and the yields are encouraging.

Mr. Nice is a hybrid strain created by Sensi Seeds. It is a cross between a government strain G13 and Sensi Seed’s Hash Plant- G13 x HP.

Patients have reported that Mr Nice can treat the following medical conditions:

Mr. Nice is a great choice for medicinal use because of the potent indicaness as well as considerable CBD amounts. It is deeply relaxing and this sorts out those pains and aches that have pitched tent in your body. Patients report feeling light and pain-free after indulging in Mr. Nice. The relaxing effects eventually culminate in deep sleep that is not associated with vivid and tiring dreams.

Mr. Nice has significant amounts of THC which is great for fighting different types of pain. THC is also responsible for the hunger pangs that come with consuming this strain. Patients with appetite problems can make use of this effect.
CBD coupled with the terpenes is useful in relieving stress and treating mood disorders.

To make the most of this strain’s medicinal properties, it is advisable to start with moderate doses, remembering that the effects have a slow onset.

Cannabis research has opened doors for the discovery of different compounds that are present in the cannabis plant. Cannabinoid and terpenes are among the numerous compounds in the plant, and among the most studied as well. Terpenes are known for producing scents in plants, they are actually the smell-emitting compounds in plants.

Mr. Nice has the following aromas that can be easily picked from the buds:

Piney and spicy- Pinene and caryophyllene

According to the Weed Advisor report, this strain has myrcene, limonene, and caryophyllene.

Myrcene is the most abundant terp in many cannabis strains and it’s known for its anti-inflammatory and sedative effects. Mr. Nice has both effects, so this terp complements the strain very well.

Limonene has mood-elevating properties while caryophyllene help in relieving anxiety.