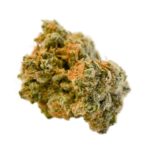 Orange Cream is an Indica dominant (70% indica and 30% sativa) strain that is well-known for its medical marijuana properties. It features bright green buds with crystal white trichomes along with protruding amber hairs. Orange Cream is a cross between Orange Crush and Ice Cream cannabis strains. A different variety can be achieved by crossing Orange Valley OG and Cookies & Cream.

Orange cream has a potency of 9/10 with an effect that lasts approximately 2 hours. Its THC level is very high at 20.65% and it has a CBD level of 0.20%. Its aroma is highly orange-like and dank. In terms of flavor, it tastes like candy. It induces a feeling of relaxation with a tingly body buzz. It has a medium height and very large yields.

This strain is ideal for evening and night time use.

Due to the high THC levels, Orange Cream cannabis’s high has heavy effects that are energizing and uplifting. The cerebral buzz delivers a rush of euphoria to the mind that triggers creativity and deep relaxation. This also comes with intense happiness and the user will feel as if they are being lifted up on a cloud. The body hit is moderate and will not induce a couch lock effect. However, do not underestimate its potential to ease away body aches and chronic fatigue symptoms in the body.

Orange Cream is a moderate and pleasant strain of marijuana that is a great introductory strain. Its effects can be listed as being:

Orange cream is a well balanced strain that comes with minimal side effects. Like most other strains with THC, Orange Cream will cause blood shot eyes that will clear out after the THC is out of your system. Apart from the fact that this may be a nuisance, it is not harmful in any way.

On rare occasions patients have reported the following symptoms:

Orange cream is a good medical strain due to that makes use of the high THC amounts. Patient reported medical conditions that can benefit from Orange Cream strain include:

Terpenes are responsible for the aromas and scents of the different cannabis strains. They all boost the therapeutic potential of the strains by potentiating the effects of cannabinoids. Orange Cream has terpenes that produce aromas reminiscent of tangy, citrus fruits with candy undertones. This is highly suggestive of the following terpenes: Caryophyllene, myrcene, limonene and Terpinolene.

Limonene has the smell of lemons and you expect to find this terpene in most citrus fruits. It is a popular mood enhancer which is ideal for reducing stress and symptoms of depression.

Caryophyllene gives off a spicy scent with peppery notes. Expect to find this terpene in spices such as oregano, basil and rosemary. Recent research has shown that this terpene could be helpful in the treatment of alcohol withdrawal symptoms.