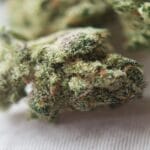 Queso Perro is a hybrid strain that is a cross between a 90’s UK Cheese and Stardawg from Dirk Diggler. Queso Perro means Cheese Dawg and it was created by Cloud Cover. As the name suggests, it has a pungent cheesy aroma that is unmistakable. The scent is also covered in musky notes due to the high presence of myrcene in this strain. The exhale is salty and may take some getting used to; this is definitely not the strain to excite patients who love some tropical fruitiness to their cannabis. The taste is sour and dank, so you are better off appreciating its medicinal benefits and getting past the unappealing scent and taste.

Many people mistake Queso Perro for Queso, which is a strain bred by Kannabia seeds. The two are alike in their cheesiness, and indica dominance. However, they originate from different parents and therefore will have major differences in their genetic make-up. They are also created by different cannabis companies.

Queso Perro has high THC amounts that frequently get to 30%. This makes this a heady strain that is very uplifting and energizing. Just a little of this and you will be consumed by calming sensations that start at your temples and fill your head within minutes-about fifteen. The high builds up progressively and will quickly translate to an overpowering euphoria for newer patients. This also comes with increased talkativeness and a ravenous appetite. Even experienced users have reported feeling overwhelmed by this strain. Fortunately, a sense of tranquility follows the energy buzz and this will last until the THC clears from the body. Due to this, Queso Perro is better taken in the afternoon when you still have a couple of hours before winding down the day.

Queso Perro does well outdoors, as the plants can grow very tall. Expect to harvest in mid-October when growing outdoors. However, Cloud Cover has a state-of-the-art facility in Oregon where they do their breeding. They adhere to sustainable practices in their farming as well as high-tech systems to optimize the plant environment.

This is an indica dominant hybrid strain, the exact indica: sativa ratios are not known. It has 30% THC and 0.11% CBD.

Queso Perro was created by an Oregon based company called Cloud Cover and it is a hybrid mix between UK Cheese and Stardawg.

Queso Perro is an energizing strain that has a final relaxing effect on the body. Patients enjoy the euphoria that comes from the high THC content in this strain. The high is uplifting and helps in stirring creativity. Queso Perro will help you forget of immediate worries so you can focus on new things. For shy people, this strain is a savior as it helps one open up and be able to take part in social activities.

Patients have reported that Queso Perro can treat the following medical conditions:

Queso Perro also has some an abundance of myrcene which adds to the pungency. A study conducted by Ethan Russo in 2011 showed that myrcene has both anti-inflammatory and sedative properties.

Lastly, Queso Perro has linalool which smells of lavender. Unfortunatley, it is present in small amounts. The smell of linalool helps in uplifting the moods and relieving symptoms of depression.