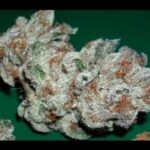 Rude Boi OG is an indica dominant hybrid strain with strong OG genetics. It was bred by Archive Seeds and it is a cross between Irene OG and Face Off OG, both are OG phenotypes. It has 60% Indica and 40% Sativa. The THC levels are 19%-22%.

The smell of Rude Boi OG is pungent diesel, like other OG strains. Cracking open a jar of Rude Boi OG will quickly fill up the room with this unmistakable dank smell. You may also be able to detect some minty and piney scents from Rude Boi.
Breaking up the buds will give you an even stronger scent. Fresh buds of Rude Boi OG are sticky and hard to break by hand. They are mostly deep green but have some purple hues that come up as the plants mature. This is due to the presence of anthocyanin which a therapeutic flavonoid. The pistils are not so prominent but can be spotted periodically curled between the buds.

The smoke from Rude Boi OG is earthy with hints of mint; it leaves a diesel-like after taste in the mouth. When you inhale, the smoke will quickly fill up your lungs and you will begin to feel relaxed and clear-headed. The earthy taste is not one to look forward to, but once you get past it you will enjoy the relaxing effects of this strain. It will also make you a bit sedated and hungry as well.

Rude Boi OG will induce euphoria 15 soon after you have your first puff. If it’s your first time, expect to feel extremely happy, energized, clear-headed and in some cases “spacey.” The spacey feeling will have you feeling like you are having an out of body experience. If you take more than you can handle, this can, unfortunately, translate to confusion and paranoia as you struggle to catch up with your racing thoughts.

A deep sense of relaxation on your body will creep up on you soon after. As much as Rude Boi OG is not sedating, the relaxation it causes promotes rest. It can be used in the treatment of fibromyalgia, depression, stress, fatigue, and lack of appetite.

Rude Boi OG is a sturdy strain that is easy to grow. It can withstand mold and mildew and other harsh conditions. Unlike most indica strains, this strain can grow very tall to a height of 6 feet.

Rude Boi OG is a cross between Irene OG and Face Off OG. It was created by Archive seeds.

RudeBoi OG causes a strong euphoric buzz that is quick to fill up the mind. Artists will enjoy the stir of creative juices and the increased level of focus that comes with it. The effects transcend down the body to the muscles causing heaviness in the limbs. This causes a couch-lock where the patient is not able to pull themselves up from where they are sited. This comes accompanied by hunger pangs, plan to have some snacks nearby so that you don’t have to get up to go to the kitchen.

Rude Boi OG will also cause drowsiness and eventually you may fall asleep. It is advisable to take this stain at the end of the day.

Rude Boi OG will cause dehydration symptoms such as dry mouth and eyes. This can be addressed by increasing the intake of fluids and should not be a cause for concern.

Red eyes are usually as a result of dilated capillaries in the eyes. High levels of THC will trigger this. You just need to wait until all the THC clears from your body and your eyes will clear out.

On rare occasion, Rude Boi OG will cause:

Patients have reported that Rude Boi OG can treat the following medical conditions:

RudeBoi OG has a lot to offer patients. The uplifting effects on the moods and spirits are helpful for people suffering from depression. The cerebral effects also help to deal with stress and anxiety. Patients with PTSD have benefited from the calming effects of this strain.

On the digestive system, Rude Boi OG stimulates appetite and can be helpful for people with diminished appetites. This applies to cancer patients undergoing chemotherapy and patients living with HIV/AIDS.

The smell of RudeBoi OG is a mix of pine, pungent and sweet. The terpenes present include pinene, humulene, caryophyllene, and linalool.