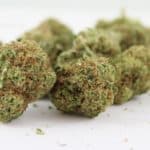 Sensi Star is a mysterious treasure, known for its potent nighttime effects and unclear origins. It is an award-winning indica cannabis strain that has deep green and purple leaves that sparkle with trichomes. Its scent and taste are of forest, earth, and lemon.

Marketed as one of the most potent indica strains in the world, it is an Indica dominant hybrid with a 70% Indica and 30% Sativa concentration. With a THC content that can hit 26%, it is unquestionably one of the strongest marijuana strains available. It was initially released in 1995 and ‘improved’ two years later by Paradise Seeds. It has a strong calming effect on the nerves, making one feel happy and euphoric at the same time. It brings on feelings of relaxation and creativity. Sensi Star is great for treating anxiety and depression of different kinds. It can also be used for curing hyperactivity. It is useful for inattentiveness and helps in improving focus and concentration on things.

Sensi Star only requires seven weeks to flower, but renders its best THC levels when grown with hydroponics.

This strain is best used in the evenings or night due to its ability to induce sleep and its high THC levels.

Sensi Star will start with cerebral effects, lifting one’s spirits leaving the patient feeling quite happy and care-free. The hit comes in fast and hits hard. After several minutes, the patient experiences a body high, relaxing the muscles and overpowering the mind with a lazy lethargy that makes it hard to concentrate.

Its effects are intense, automatically relaxing one from head to toe. The cerebral high is so potent that it is generally not recommended for new patients. It also has a positive effect on one’s mood. Sensi Star is definitely a strain for the evening or night time. In large amounts, it acts as a sedative and should help the patient enjoy a restful night’s sleep.

The effects of Sensi Star can be listed as being:

The negative side effects associated with this strain depend entirely on the user and whether they are new to the product or relatively weathered. Use of this strain can result in:

On rare occasions, especially with higher doses of this strain, patients have reported the following symptoms:

Sensi Star is popular in the medical cannabis community for its many useful properties that allow patients to resume a relatively normal life, despite their illnesses. This strain is a very useful tool in the fight against chronic stress, making it easier for patients to find a state of relaxation that last them longer than prescriptions medication, and with less side effects. This indica-dominant strain has also been proven to be effective in managing pain such as muscle spasms, back pain, chronic migraines and even joint pains. Mood disorders such as depression and anxiety have also been positively soothed with the help of Sensi Star. Individuals with fibromyalgia,may also find Sensi Star useful.

A summary of conditions Sensi Star can help manage are:

The terpenes in Sensi Star give it a taste of lemon with hints of pine. It’s an easy strain to smoke and leaves a gorgeous, sweet aftertaste. The terpenes it contains include:

Offers a citrus aroma and is used for its antibacterial, sedative, and anti-inflammatory properties.

Known for its lavender aroma, linalool is used to treat epilepsy and is said to have anti-anxiety properties.

This spicy terpene is akin to the taste of black pepper and is used as a cancer inhibitor.

Offers a citrus flavor and is said to boost metabolism.