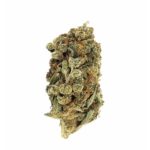 Super Skunk is a predominantly Indica cannabis strain with potent body effects. The strain inherits its robust flowers from Skunk #1, which is the parent strain that most people refer to as skunk due to its resemblance to the white and black woodland creature. Most users describe the smell as one that is similar to the fungus underside of a rock or cheese. The smoke is mostly defined as tasty and sweet.

The strain is green in color with some undertones of brown and orange. Super Skunk is ideal for both recreational and medical users. With the Indica-dominant style, the strain is a reliable pain reliever. Therefore, some people use this relaxing cannabis strain to treat cramps and headaches. It also helps alleviate insomnia and calm anxiety at night.

Super Skunk is also good for recreational uses as it comes with a distinctive smell that may put you into a euphoric stage or spacey state. The cannabis strain produces a great relaxing effect over the body that makes it a bold answer to increased body pains and stress. Therefore, patients with high tolerance levels are more likely to find this strain amazing.

Super Skunk is an Indica Dominant Hybrid strain made from Skunk #1, which is a renowned cannabis strain crossed with Afghani genetics. The strain contains high THC levels at 19% and high CBD level, which makes it perfect for patients with severe medical conditions such as seizures.

Super Skunk is among the legendary cannabis strain that was developed in the early 70’s by a group of breeders at Sensi Seeds. It is a cross between an Afghani Indica purebred and two Sativa landraces, Acapulco Gold and Colombian.

Super Skunk offers numerous benefits to medical users and recreational users. Patients with cramps and headaches reported that it is a reliable solution. Apart from acting as an effective pain reliever, Super Skunk can also be used at night to alleviate insomnia and calm anxiety.

The strain has a very high THC level, which makes it a perfect treatment for severe medical conditions like seizures. It is also suitable for patients with chemotherapy-induced nausea as it treats loss of appetite.

Here are the positive effects reported by patients:

Commonly reported side effects of consuming Super Skunk as reported by patients include the following:

In more extreme cases, Super Skunk is also associated with some rare adverse effects. These include:

Terpenes are organic compounds that are found in plants such as cannabis and some fruits and produced by some insects. In plants, Terpenes are produced in the trichomes, which are the sticky, shiny, mushroom-shaped crystals that cover the buds and leaves. For cannabis trichomes, they produce aromatic terpenes to protect the plant against insects and animals. But for humans, the organic compounds are important because of some physiological effects and other health benefits that they may have. You can identify the terpene in each cannabis strain by the smell in them.

Myrcene is found in a number of plants including cannabis, thyme, hops, mangoes, and lemongrass, which makes it the most abundant terpenes. It is also important in determining whether a given cannabis strain is Sativa or Indica. Usually, a cannabis strain or plant with more than 0.5% myrcene is an indica.

Linalool is a terpene with a floral fragrance and colourless or very pale yellow colour. It is commonly used as a sleep aid and aromatherapy, and it can be a potent relaxant. The terpene has also been used in traditional medicine for anxiety treatment.

The organic compound is also said to enhance the production of Vitamin E, which means that it supports healthy body functioning. Some of the medical effects of the Linalool include reducing lung inflammation and congestion and is also used as an anti-inflammatory, anti-fungal, anti-bacterial.

This is a terpene that is found in cannabis and citrus fruits. Limonene has a citrus odour; the taste is a mix of sweet but somewhat bitter and tangy.

Terpinolene is a terpene with a woody or smokey odor. Apart from cannabis, it is found in other plants including lilac, cumin, apple, and tea tree. Terpinolene is an anti-bacterial and anti-fungal and also helps fight cancer.

Pinene is one of the most common terpenes as it is found in higher concentrations in cannabis strains such as Chemdawg, Trainwreck, Jack Herer, Super Silver Haze and Bubba Kush. It is important in the human body as it acts as the biosynthetic base for CB2 ligands in the ECS. It is both an anti-inflammatory and an analgesic.