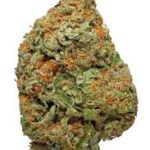 Sweet Kush is a potent strain that is a cross between OG Kush (Sativa-dominant strain) and Sweet Tooth (Indica-dominant strain). Sweet Kush is known for its potency although the exact amounts of THC and CBD in it are not clear. However, the strain has a reputation of being helpful for patients who need CBD.

With the citrus and sweet flavor, Sweet Kush has a taste similar to a lemon drop candy. The hybrid offers both body and heady effects as it contains both types of cannabis. The immediate effect of Sweet Kush is a cerebral sensation that fades into a sedated, lazy body with pain relief and deep relaxation.

It also provides a “high” feeling that offers a healthy dose of euphoria and can potentially induce creativity. The strain has sweet aroma and flavor that match its name with hints of berries and earth. Sweet Kush may cause you to feel sedated and lazy, which makes it perfect for nighttime and after work strain due to its strong relaxing properties. Therefore, it is advisable for first-time patient to be cautious with the strain when starting out.

Sweet Kush strain is known for its effectiveness in raising spirits and stimulating creativity. With powerful THC levels, the hybrid strain leaves patients with a mighty buzzed feeling just after taking it. It then leads to immediate mood shift and a feeling of being uplifted and blissful. You experience a euphoric stage across all parts of your body, making you sink into deep relaxation.

The sedative-like effects associated with this strain make it ideal for the treatment of numerous health conditions. It causes numbing that eases off tightness and cramps allowing you to experience great relief. This allows you to enjoy good nighttime with uninterrupted sleep. Sweet Kush is a mild stimulant making it good for poor circulation, nausea, and digestive issues.

With the powerful THC amounts, Sweet Kush is associated with minimal of adverse effects. But patients have reported the following negative effects:

Sweet Kush has a powerful and well-balanced formulation that enables it to treat numerous medical conditions. It is tingly and energetic, cerebral and giddy which means that its effects are felt in the mind and the entire body.

Patients have reported that the strain is used to treat the following medical conditions:

Terpenes are the compounds that are responsible for the unique and pleasant smell in cannabis. However, some people find the smell overwhelming and unpleasant, but most pot enthusiasts find it enjoyable and calming. These compounds also produce a sweet and fruity aroma in some strains, citrusy aroma in others, while others smell and taste like lavender. However, some strains may have a more earthy and pungent smell.

The most abundant terpenes in Sweet Kush include Myrcene, Caryophyllene, and Limonene. These terpenes are known to help relieve anxiety and stress as well as promoting body and mind relaxation. While it also contains a moderate amount of Pinene, Humulene, and Linalool, which provide therapeutic benefits and promote the relaxing effects.

Myrcene is the most common terpene in cannabis, which explains why some strains have up to 65% of the compound in the total profile. This terpene has a musky, earthy taste similar to cloves and a red-grape, fruity aroma. Usually, strains that contain 0.5% of Myrcene are indicas, which are packed with sedative effects.

Caryophyllene is a terpene that is best known for its peppery and spicy note. It has anxiolytic and analgesic properties, while some studies have found that it has a promising role in alcohol rehabilitation. It is recommended for treating alcohol withdrawal symptoms. The terpene binds to CB2 receptors making it an effective ingredient in anti-inflammatory creams and topical as well as the only one that binds on these receptors.

This compound is the second most abundant terpene in marijuana though it is not necessarily available in all strains. Limonene produces a citrusy smell that is similar to lemons, which explains why all citrus fruits contain the compound in large amounts. It helps boost mood and relieve stress. It is also found to offer antibacterial and anti-fungal properties, while a study has also revealed that it may help in reducing the size of tumors.