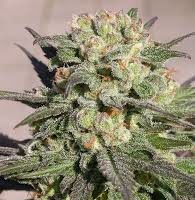 Warlock Strain is an Indica dominant hybrid with 85% Indica and 15% Sativa. It has moderately high THC levels of between 14%-20% with moderate amounts of CBD. It has a memorable aroma of earthy skunk with a suggestion of peppery herbs. Its flavor can be described as being berry, fruity, sweet and woody. Its bud has forest green pepper-shaped nuggets that are long with a splash of thick stubbly orange hairs with hints of bright neon green. The nuggets have a sprinkling of a fine layer of almost transparent trichomes that have abundant sweet gluey resin.

Patients have experienced an instant, euphoric head buzz spreading into a warm body buzz that alleviates pain and discomfort. This is a result of the sativa and indica effects working together. There are varieties of the Warlock strain that have been bred to contain higher levels of CBD to manage pain, inflammation, and other ailments. Due to these powerful combination effects, Warlock is said to be an ideal strain for treating patients suffering from conditions such as chronic stress, ADD or ADHD, muscle spasms, and chronic pain due to injury and illness.

This strain is ideal for evening/night time use.

Warlock cannabis strain is a cross between Skunk #1 and Afghani Landrace.

Warlock marijuana induces strong a cerebral high followed by deep body-mind relaxation. It uplifts ones mood, induces happiness and improves focus. It also relaxes the body, calms the mind, stimulates appetite, relieves stress, and controls pain and triggers couchlock in many occasions. This strain can be described as being ultimately relaxing. One of its parents, the Afghani is one of the best in its class of pure Indica strains which apart from giving an intense body high, creates a mild euphoric rush.

On rare occasions patients have reported the following symptoms:

The following medical conditions have been reported to benefit from the use of the Warlock Strain:

The Warlock strain is rich in scents, and equally abundant in terpenes.

The earthy smell given off by Warlock indicates the presence of myrcene. It also contains caryophyllene, limonene, linalool, pinene, bisabolol and terpinolene.

Myrcene gives off a musky scent that may dissuade new patients, especially when it is not masked by other sweeter terpene scents. It is very abundant in most indica strains and is ideal for relieving painful conditions.

This is also known as levomenol. It smells of chamomile and offers anti bacterial properties as well as analgesic properties.

This terpene smells of turpentine and acts as a strong sedative. Research has also shown that this terpene has anti proliferative effects.