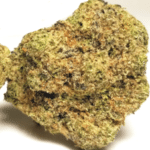 99 Problems is a Sativa dominant hybrid strain with potent Sativa effects. It provides a long-lasting cerebral buzz that is energizing and refreshing. It’s packed with THC that may be as high as 31%, this means that new patients should watch out for psychedelic effects that may throw them off. The CBD, on the other hand, is close to 0.1%, not very high but enough to offer some anti-seizure effects.

99 Problems is a cross between the popular Stardawg and White 99 by Cloud Cover.

At first glance, you are likely to fall in love with the appearance of this strain. The nugs feature green that starts off with a and orange hues that stand out, while subtle purple hues emerge from inside the buds. The trichome production is heavy which gives the nugs a silvery-white appearance. Orange pistils and white trichomes indicate a properly cured flower.

The strain has a multi-layer scent dense diesel-like odor that quickly transcends to a fruity fragrance. The scent doesn’t do much to betray the potency of 99 Problems. However, new users may be put off by the funky diesel-like aroma of this strain. They have often described it as foul-smelling morning breath that strongly dominates the berry tones.

On the inhale, your mouth will be filled with fruity flavors, which lasts until you exhale. Afterward, you may sense a bit of tanginess and spice which will be followed by an almost instant head rush as the effects begin to set in.

Although 99 Problems is a THC loaded Sativa strain, the effects can be well tolerated because they set in steadily, just make sure not to overdo it. In moderate amounts, this strain will make you a social butterfly that is consumed with happy thoughts.

Being a strong Sativa, patients turn to 99 Problems to help manage severe stress and anxiety. This strain also blunts pain, reduces seizures, and triggers the munchies that can sort out appetite issues. Others use this strain to treat insomnia or to manage the fallout from MS and Parkinson’s disease.

Because it is has high THC, people at risk for paranoia are better off avoiding it. Also, those with respiratory issues should be aware that this strain can induce coughing bouts because of pungency.

On a positive note, this strain imparts uplifting cerebral effects that can stimulate creativity. It is suited for daytime use, especially a wake and bake as the effects last for a long time. Beware that this strain has a lasting buzz that may last for up to four hours.

99 Problem is a cross between the famous Stardawg strain with White 99. It was created by the master breeders Cloud Cover.

The euphoric effects 99 can be a perfect remedy for low spirits. However, this strain has a lot more to offer than just an uplifting head buzz. It offers a gentle body hit that is perfect for unwinding and relaxation. It also works well as a social strain where it will get the user roaring in laughter and chatting the hours away. Taken in moderation it can be the perfect wake-and-bake strain without being overwhelming, making it ideal for patients.

The effects of 99 Problems are pretty long-lasting, so be cautious about going overboard.

You wouldn’t be wrong to suggest that “with great power comes great responsibility.” With THC that may be as high as 31%, you can easily get thrown off by psychedelic effects from this strain. Mostly, patients have reported usual THC- related negative effects such as dry eyes and mouth. Expect red eyes as well. But should you over-indulge be prepared to get headaches, dizziness and instant panic.

On rare occasions, patients have complained of extreme paranoia.

99 Problems is the one strain that can solve all your 99 problems, literary. First, the mental buzz is ideal for taking away tension and worries from your mind giving you a sense of calm and control. This is ideal for uplifting your moods and easing away feelings of depression and anxiety. Secondly, those suffering from chronic pains and aches can greatly benefit from this strain. Thirdly, it can also sort out bouts of nausea as well as a general lack of appetite. Even though the body effects are not so strong, this strain can ease fatigue and muscle aches. Some patients have used this strain to reduce the eye pressure caused by glaucoma hence improve their vision.

Patients have reported that 99 Problems can treat the following medical conditions:

99 Problems has a strong pungent smell that emanates from myrcene. Myrcene is enveloped by sweet-smelling terpenes which are linalool and the citrusy limonene. Other terpenes present include the spicy beta-caryophyllene as well as humulene.