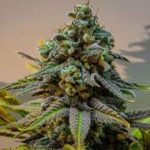 Cinderella 99 is a sativa dominant hybrid that is a cross between the famous Jack Herer and Cinderella 88. It has a high THC content that ranges between 21%-23%, making the cerebral effects very potent. Consequently, it is a strain that may not be well tolerated by new patients. But for those who can tolerate the heady effects, this strain is great for inducing appetite.

The smell is a mix of earthiness, citrus and tropical fragrances. The smoke is flavorful and has hints of sugariness with some spicy after taste. However, the scents and flavor will be determined by how fresh the buds are and how they have been stored.

The effects of this strain will include immediate excitement, euphoria and racing thoughts. New patients may experience paranoia because the heady effects set in quite fast. Some patients have described this strain as dreamy, something that makes you feel like you are floating in space. Given the high THC content, this strain is better used during the day.

There is also a different phenotype of Cinderella 99 that is equally as popular. It was created by Mr. Soul of Brothers Grimm. This phenotype is a cross between Jack Herer and Shiva Skunk.

Being a sativa, Cinderella 99 gives epic yields in a short duration of time. It does well indoors and the plants will have a bushy stature. The buds are dense and low-lying, and they are richly coated with resin packed trichromes. These buds are hard to break by hand; you will need a grinder or a pair of scissors. The hue is a light form of green with light orange pistils sticking through the sugar particles. Having such strong genetics and high production, breeders love this strain and have used it to create other hybrid strains.

This is a medicinal strain that can be used to tackle: nerve problems, headaches, lack of appetite, and ADD.

Cinderella 99 is also known as C99 or Cindy. Cindy was featured by the High Times Magazine among the “top ten strain in 2009.”

Being a sativa, this strain gives a strong cerebral hit that is energizing and uplifting. Before you get used to the high, you may experience an overwhelming effect from the high THC content. People who constantly suffer from depressed moods love this strain because it is invigorating and very stimulating. Avoid taking Cinderella 99 at night because you may not be able to fall asleep.

Patients have reported that Cinderella 99 can treat the following medical conditions:

Pinene: This terpene helps in treating symptoms of asthma.

Camphene: This terpene has cardio-protective effects. It helps in lowering bad cholesterol levels.

Myrcene: This musky scented terpene may help in preventing peptic ulcer disease. It also happens to be the most abundant terpene in most cannabis strains.

Limonene: This terp is often used in aromatherapy because it has mood-uplifting effects. It has a strong citrus smell.

Linalool: This terp has been shown to reduce inflammation caused by cigarette smoking.

Guiaol: This terpene is not very common in cannabis but it can be found in many other plants. It can be used to stimulate menstruation.

Bisabolol: This terpene has anti-inflammatory as well as anti-microbial properties. It has a pleasant aroma and it is frequently used in skin care products.

Terpene concentration will vary from batch to batch of the strain. Therefore, the list above is a general picture of the terpenes that may be found in Cinderella 99.