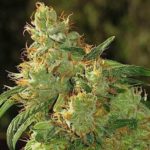 Gainesville Green is a cannabis sativa strain typically grown in Gainesville, Florida. It got its name from Gainesville since the early 70s this marijuana strain was among the first species to be cultivated and widely accepted. In the 1970s, Gainesville Green was the ultimate high. This locally grown strain of marijuana was the most used and popular weed, it was used above Jamaican and Mexican weed because of its high potency.

Though not very common and almost going extinct, this local but powerful strain tastes and smells wonderfully fragrant exactly like a pine tree with light green buds. When prescribed by a medical practitioner, this marijuana strain can be taken during the daytime. Many marijuana users believe that authentic Gainesville Green has disappeared from the open market and the street the 80’s and that only a few may exist in private grow rooms.

This sativa dominant strain is believed to have been first grown in Gainesville, Florida. Some reports state that this highly potent marijuana is a cross of Afghani and Jamaican strains while some believe that its genetics are generally unknown. Some users describe the Gainesville Green high as a slow uplifting buzz.

Unlike some other strains, Gainesville Green is very easy to cultivate. It is a sativa-based marijuana that flourishes better in hot climates with longer daylight hours and high sunshine. It’s a very tall plant that can grow as much as 12 feet. it can be cultivated both indoors and outdoors.

Gainesville Green marijuana is a sativa dominant that has energetic, happy and uplifting effects. It is a fine recreational strain that boosts creativity and inspires positivity in its users. It is also reported to provide an instantaneous euphoria and relaxation to the body and mind. This medical plant can put the worst insomniac to rest, help relief pain, treat depression and also provide mental stimulation.

Gainesville Green weed is an incredibly important medicinal strain that is used to treat terminal illnesses such as cancer. This potent cannabis is also often recommended by physicians of patients with some other types of medical conditions including: