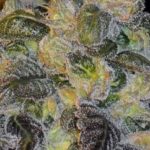 Lake of Fire is a Sativa dominant hybrid strain with 60 Sativa and 40% Indica. It’s a potent strain with THC shooting to 20% and sometimes more. This means that new patients may get extra spacey after a few puffs, you better not be at work when trying out Lake Of fire. As the name suggests, it can be a “lake of fire.” CBD levels are minimal; below 1%. Though they boost the healing effects of this strain they may not be able to taper down THC’s psychedelic effects.

The image of Lake of Fire is rather epic, with large mossy green buds and spade-shaped leaves that fan out from below the buds. Brown and orange pistils are seen peeping among the buds while white trichomes create the perfect finishing for the nugs.

Lake of Fire has an earthy aroma that’s mixed with piney tones. A few puffs later and you will be able to taste the harshness of myrcene on the exhale. The Kush genetics add a little sweetness to this strain, though generally be prepared to experience the real earthiness of weed from this strain.

People who have taken this strain is social settings have reported that they felt the urge to push their social boundaries by transforming to being “the life of the party.” Those who enjoy the “high” that comes with marijuana will do well on this strain.

After some time the indica effects will kick in. Limbs and eyelids may feel heavy and you may be forced to rest. As the relaxing effects sweep through your body, you will feel tensions ease away and chronic muscle aches may begin to subside. This strain is sedating and is better taken in the afternoon as you wind down your day.

Lake of Fire has many medical applications. It has been used by patients suffering from ADHD who need to focus on a particular project for a given duration. It has also been used by patients seeking a reprieve from symptoms of depression. It is useful in treating pain as well as inflammation. However, patients who are sensitive to high THC amounts should opt for strains with lower THC amounts.

Lake of Fire is a fast-acting strain whose effects come rushing in. The general effect on the mind is exhilarating happiness which most patients enjoy. Newer patients may, however, be overwhelmed and get paranoid. Patients also enjoy the body high that comes later. It feels like you are experiencing a deep massage that penetrates deep to your muscles. Even new patients will enjoy this feeling.

Given the high THC amount, this strain will have some negative effects. There is what is called a “weed-hangover” which comes with brain fog and headaches. A small study published in 1985 showed that these effects do happen, especially after one has consumed a potent weed strain. Other negative effects may include cotton mouth, dry eyes, and fatigue. The cause of cottonmouth has been disputed, while others claim that it is attributable to dehydration, others insist that it happens due to temporary blockage of salivary glands caused by THC.

Medical Benefits of Lake Of Fire

Patients have reported that Lake Of Fire can treat the following medical conditions:

Despite the low CBD in this strain, it offers a number of healing benefits. It has been used to stabilize mood and treat mood disorders. It has also proved useful in alleviating symptoms of stress and depression. In moderate doses, it can be used to treat insomnia, though as a temporal measure.

Lake of Fire is a terpene-rich strain with predominant earthy, piney and spicy aromas. Like its Kush relatives, it is loaded with floral terpenes as well.

The terpenes present in this strain include Myrcene, Caryophyllene, Pinene, Linalool, and Terpinolene. Myrcene, linalool, and caryophyllene are the most abundant terpenes in cannabis. Terpenes work together with THC and CBD to boost the therapeutic potential of this strain.

A study published in NCBI outlined the medicinal benefits of terpenes in conjunction with cannabinoids and flavanoids. The listed benefits included the treatment of migraine, headaches, and pain. The study also suggested the use of these compound entourage effects in treating opioid addiction.