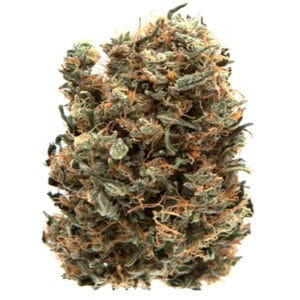 The Pineapple express strain is a sativa dominant hybrid strain (60% sativa and 40% indica) and is a blend of the Hawaiian and Trainwreck strains. This strain is very popular and has been appreciated by a lot of people thanks to the film “Pineapple Express” starring Seth Rogan. This strain has a scent which is likened to that of mango and fresh apple and a taste like that of cedar, pine, and pineapple. The strain gives its users a mild and soothing body-numbing buzz, which is a feeling everyone will love to have. This strain is not as violent as the film portrayed it to be, rather, it has mild and soothing effects which boost cerebral activity.

The Pineapple Express strain has a medium growth difficulty. This strain can be grown both indoors and outdoors. When grown outside, it requires a warm climate for it to grow to its full potential and when grown indoors, it requires a lot of ventilation and light in order to produce high yields. This quality of the strain can be improved with the use of Flower Power fertilizer which will improve the soil nutrients. The Pineapple Express strain flowers in seven to nine weeks when grown indoors and can yield up to 18 ounces per meter. Outdoors, this strain must be harvested mid-October and can yield up to 19 ounces per plant.

The weed plant is tall and has a thick center of orange pistils and resinous trichomes which carry strong terpenes and cannabinoids. The leaves of the Pineapple Express strain are deep green and protrude from the sticky-icky white center. The plant has a very strong fragrance which smells like a melange of orange, fresh apple, citrus fruit, pineapple and the flavor of this delicious weed plant.

Users of this strain reported that it has both positive and negative effects. These effects include:

Negative sides effects such as dry mouth and dry eyes were reported by users of the Pineapple Express Strain.

After smoking this amazing strain, you will have feelings of calmness and stimulation at the same time. The Pineapple Express will not only heighten your senses but will also boost body energy levels increasing creativity, awareness, and focus.