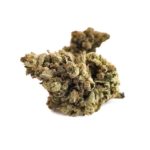 Quantum Kush is an extremely potent sativa leaning cannabis strain with 75% sativa to 25% indica. The THC levels are usually between 25%-30% which is considerably high, most users have had quite the experience with this strain. This CBD will not go beyond 0.2%, this is just enough to boost the synergy of the different cannabinoids and terpenes working together.

Quantum Kush was originally developed by TGA Genetics. The strain is a cross between Sweet Irish Kush and the sativa Timewreck, it gets its Kush from the former and its “sativaness” from the latter.

Most “Kush” strains will have high THC amounts and strong sedative effects. They debuted in the US in the 1970s and have since made a name for being strong strains both for recreational and medicinal use. Famous Kush includes strains such as Hindu Kush, Purple Afghani Kush, and OG Kush.

Like most Kush strains, Quantum Kush has a dominant skunky smell that is stronger when the buds are broken and combusted. The flavor on the exhale is herbal with hints of pine and tropical fruits. It’s the kind of flavor that calls for some getting used to, the herb is overpowering.

Quantum Kush buds are medium-sized and have an olive-green balls color. They are generally beautiful especially when the bright orange beautiful pistils are standing out boldly against the silver trichomes atop the buds.

With such high THC levels, the high is fast-acting and strong, at first increasing focus before this turns to complete euphoria. It’s the kind of strain to trigger introspection and deep thought but in a light-hearted manner. This strain is best consumed when winding down the day.

It takes between eight and nine weeks for this strain to fully mature fully.

Quantum Kush is a cross between Sativa TimeWreck and Sweet Irish Kush. It was originally developed by TGA Genetics.

In spite of Quantum Kush nugs being very much indica-like, the effects are all but indica.

This strain is recommended for users seeking the ultimate Sativa high. Users have reported that the euphoria makes them feel like they are floating in outer space having left all their worries behind. This also comes with cheerfulness, immense happiness, and a bubbly feeling. Of course this only happens when you don’t overdo it otherwise you may end up ‘whiting out.’

Patients have reported the following positive effects after taking this strain:

Quantum Kush has a balanced body to mind effects which makes it appealing to many patients. With the high THC content, patients with severe pain have to it to numb their pain. Cannabis addresses pain through different mechanisms; one way is through numbing the pain sensation. Patients with stubborn pain that’s unresponsive to traditional treatments have found great relief from trying this and other high THC strains.

The mood-stabilizing effects of this strain are noteworthy. Patients with chronic stress and depression and anxiety disorders can also benefit from this strain.

Patients have used this strain to address:

You’ve probably heard that “terpenes are the aromatic oils that give cannabis its distinctive smell.” Sure they do, and not just cannabis but many other plants as well. But terpenes also boost the medicinal effects of cannabis strains.

A sample of Quantum Kush showed the following terpenes: