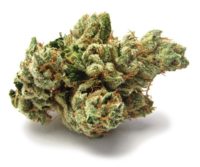 SFV OG is a sativa dominant hybrid strain created by the Cali Connection. It has modest levels of tetrahydrocannabinol (17%-22%) giving it a strong cerebral buzz. With such levels of THC, this strain is a potent pain reliever. As the name suggest, it traces its origins to the famous OG Kush strain. SFV stands for San Fernando Valley. A different strain by the name of SFV OG Kush is normally mistaken for SFV OG, this should not be the case. SFV OG Kush is a cross between a landrace Afghani and SFV OG.

SFV OG grows to a height of 40 to 80 inches. It has unremarkable small flowers that curl up, the small dense buds are solid green and are decorated with orange colored pistils. This is a resinous strain with sticky trichome layers which produce THC and other cannabinoids. The scent is predominantly piney with a lemon punch. The smoke can be a bit overpowering but it will soon clear out as the euphoria kicks in.

San Fernando Valley OG is a creation of Cali Connection. It is a descendant of OG Kush strain.

SFV OG has a mix of sweet piney taste in the mouth that may have you looking forward to having more and more of it. The cerebral hit is intense just like with most sativa dominant strains. The body hit is gentle and relaxing, it may get you locked on the couch in two hours.

Hydrating in advance will help to reduce the anticholinergic effects caused by this strain. The red eyes are nothing to worry about. THC causes the capillaries in the eyes to dilate causing more blood to flow to the eyes. Expect this effect to wear out as soon as the THC is out of your system.

With high amounts of THC, SFV OG is an ideal strain for combating chronic pain. It has shown great results in the treatment of neuropathic pain in shingles and herpes zoster.

This strain is also great in relieving anxiety syndromes such as generalized anxiety disorders. The cerebral effects are great at relaxing the mind and the patient is able to forget the anxiety causing situations temporarily. It is a good substitute for benzodiazepines such as Phenobarbital which cause physiological dependence over time.

This strain causes talkativeness and can be useful in treating selective mutism in adults. Selective mutism occurs when individuals are super conscious about their environments and the people around them. Medical SFV OG addresses these inhibitions so that the patient is able to overcome fears associated with social situations. It can help patients with social phobia form and sustain social relationships.

SFV OG is also great at inducing the munchies. This is helpful in inducing appetite in patients undergoing chemotherapy and HIV/AIDS patients. It has also shown great results in treating anorexia. Anorexia mostly affects women who fear getting fat. They are excessively obsessed with their body image and so go to extreme measures to avoid food. With the euphoria and munchies caused by this strain, the patient may begin enjoying food once again. This will help them regain their ideal body weight and achieve proper nutrition.

The body hit caused by SFV OG can be helpful in relieving body aches and chronic fatigue. Patients not able to sleep due to chronic pain or overtiredness will benefit from toking this strain just before bedtime.

Terpenes are compounds found in plants such as cannabis and they have shown great therapeutic potential. Terpenes work in synergy with cannabinoids such as THC and CBD to potentiate the medical benefits of cannabis strains. SFV OG has the following terpenes: beta caryophyllene, humulene, limonene, linalool, myrcene and terpinolene.

This terpene has a spicy aroma, close to that of black pepper. It is the only terpene that is able to bind to cannabinoid receptors. It has great pain relieving properties. Some recent research has also shown that this terp may be useful in the treatment of alcohol addiction.

Humulene is abundant in hops, an ingredient use in beer making. It gives off a distinctive woody aroma. It has appetite suppressant effects making it useful as a weight loss agent. Some studies have showed that cannabis consumers have a lower body mass index and a lower chance of developing diabetes.

Limonene gives off a lemon scented smell. It is mostly helpful as an anti depressant and as a mood elevator.

Linalool smells of fresh lavenders, you can expect to find it in lavenders, birch trees and mint as well. It is known for its anti inflammatory and anti depressant effects. It has also shown anticonvulsant properties.

This is the most abundant terpene in most cannabis strains; you cannot miss the musky smell that reminds you of weed itself. It adds to the pain relieving properties of this strain. It also has sedative properties.

This is one of the least common terpenes found in the cannabis plant its smell will remind you of turpentine. It has calming properties that exacerbate the couch lock effect of this strain. It is useful in promoting relaxation and inducing sleep.