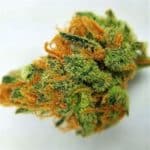 Space bomb is a Sativa dominant hybrid with 60% sativa and 40% Indica. Its name is derived from its origins, that is, it is a cross between space Queen and the Tiny Bomb. Its THC levels are approximately 14%, which make it an attractive option for patients moderate to high doses of THC. The CBD content is pretty low, at 1%. This diminishes its medicinal value but it is still helpful in alleviating low mood, lack of appetite, fatigue, headaches and stress.

Space bomb has potent cerebral effects which are calming, euphoric, and energizing. It has a sweet candy smell with notes of rotten fruit, as well as an earthy flavor of vanilla and citrus when smoked. It has bright lime green buds with flecks of orange. The buds will have a fruit candy smell with a little bit of that sweet-rot smell when they flower at 7-8 weeks.

Space Bomb can serve both as a daytime or evening strain as it induces a long-lasting relaxing effect, with a happy, intoxicating high.

This is a Sativa dominant hybrid strain that contains 60% sativa and 40% indica. It contains 14% THC and 1% CBD.

Space Bomb is a cross between Space Queen and the Tiny Bomb.

Space Bomb is a fruity flavored strain that can serve as both a daytime as well as an evening strain. This bud promises to induce a long-lasting relaxing effect that will leave you ecstatically floating in a cerebrally heightened state. It induces just enough energy to leave one feeling motivated, without feeling too strung out. Space Bomb makes one euphoric from the onset, and uplifts the mood, increasing inspiration.

This strain however can leave one in a fit of giggles, and should therefore be used in a comfortable space.

Commonly reported side effects of consuming Space Bomb as reported by patients include the following:

Constant hydration will help in minimizing these negative effects. Moisturizing eye drops may also ease the discomfort of the eyes.

Terpene Profile
Terpenes are responsible for the aromas and scents of the different cannabis strains. They also boost the therapeutic potential of the strains by potentiating the effects of cannabinoids. Space Bomb has terpenes that produce aromas reminiscent of berries, lemons and earthy undertones. This is highly suggestive of the following terpenes: myrcene, limonene,caryophyllene and Linalool.

Limonene has the smell of lemons and you expect to find this terpene in most citrus fruits. It is a popular mood enhancer which is ideal for reducing stress and symptoms of depression. It also offers anti-fungal and anti-bacterial properties.

Caryophyllene gives off a spicy scent with peppery notes. Expect to find this terpene in spices such as oregano, basil and rosemary. It is the only terpene that binds to cannabinoid receptors making it a potent analgesic and anxiolytic agent. Recent has also shown that this terpene could be helpful in the treatment of alcohol withdrawal symptoms.

This terpene smells of freshly harvested lavenders. It offers a lot of therapeutic benefits which include: analgesic, antidepressant, anti-epileptic, anti-inflammatory, anti-psychotic, anxiolytic and sedative effects.