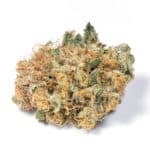 Strawberry Tangie is a Sativa-dominant cannabis strain that is strawberry flavored. This strain is prevalent in Colorado, Arizona, and West Coast although clones may be found in other areas. It is known to be a remake of the accessible Tangerine Dream that was famous in the 1990s. This strain is a cross between California Orange and Skunk strain. The Tangie features a sweet, refreshing aroma, but due to its lineage, it still contains some skunk taste and scent.

The strain is well mixed to gain a distinctive flavor of orange and citrus making it one of the tastiest strains in the market. Moreover, this Tangie plant grows to a tall height featuring small and light green compact buds. It can produce both indoors and outdoors, when grown indoors, it can be controlled, and lateral growth managed efficiently. This Tangie plant flourishes more outdoors when grown under warmer climate and in the soil. Unlike other strains, Tangie strain can withstand high levels of humidity and temperatures. It works better in a dry and warmer climate with the optimal temperatures ranging between 68 to 85 degrees.

Moreover, the Tangie terpenes get to their maximum potential if the plant is grown in a more diverse soil. Once a variety of nutrients are fed to this Tangie plant, they enhance the characteristic flavor of citrusy orange.

Tangie strain is a Sativa Dominant Hybrid strain containing 30% Indica and 70% Sativa. The Tangie is a potent strain with 0.1% CBD level and THC levels ranging from 19% to 22%. Since the THC is balanced well, this strain is ideal for new patients who may not handle the effects of intoxications resulting from high THC levels. Large amounts of CBD enhance the therapeutic potential of a strain, but in this case, the CBD level is low. However, if you are looking for a strain for more severe disorders, then try going for CBD-rich strains.

Strawberry Tangie strain is a cross between California Orange and a Skunk strain. This strain originates from the United States of America.

Strawberry Tangie contains 30% Indica that gives it the potent pain relieving properties. It has a positive impact on moods especially for those having depression. Tangie onsets you with an energizing effect, which is useful when handling physical activities and for individuals dealing with fatigue. The strain also improves your focus and creativity enhancing your motivation to manage any mental task that you encounter.

Having average amounts of THC, Strawberry Tangie consumers have reported only a few adverse effects of this strain. Here are the minimal effects reported by patients:

Strawberry Tangie is a quite stable and well-balanced strain that has been reported to offer several medicinal benefits. It is suitable for treating symptoms of ADD or ADHD. It’s used to treat eye pressure, chronic fatigue, and depression. The decent amount of Indica contained in this Tangie helps in alleviating pain. This strain also helps in treating migraine. The altering mood effect also acts as a stress reliever.

Strains contain secreted aromatic molecules in the tiny resin glands that help in producing the sweet, citrusy and fruity notes. Terpenes are known to have a wide range of medicinal effects. Terpenes are used in making beauty and health products, oils and perfumes. These terpenes work effectively with cannabinoids to increase the therapeutic potential of this strain.

Although the compounds have therapeutic properties, they provide long-lasting and more effective benefits when used together. The Strawberry Tangie a quality balancing of myrcene, caryophyllene, humulene, and pinene.

It is known best for its pepper and spicy note to enhance the aroma of the strain. It is the only terpene that binds with the cannabinoid receptors. Its beta-caryophyllene interacts with CB2 receptors making for manufacturing anti-inflammatory creams and topicals.

Humulene is mostly present in the hop which is one of the common compounds used in brewing beers. The humulene aroma results from spicy, woody and earthy notes. It has been confirmed to be suppressing appetite, and therefore it can be used for weight loss. This terpene has proven therapeutic potential in relieving pain, fighting bacterial infections and reducing infections.

It has been discovered to be the most abundant terpene found in cannabis, and recent research has revealed that Myrcene makes 65% of the total terpenes in some strains. It features earthy and musky notes resembling cloves. Also it also has a red-grape and fruity aroma. It has anti-inflammatory properties and reduces chronic pain. The terpene is also an excellent supplement for cancer treatment.

Pinene smells like pine trees and is also where they can be found in abundance. It helps in reducing inflammation and memory loss. It also helps in improving respiratory functions.