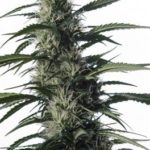 Tijuana is a sativa dominant hybrid strain. Its parents are Kali Mist and Original Haze. It is an almost pure sativa with 80% Sativa and 20% Indica composition and has flavors of pine, citrus and fruits that linger on the palate. It is a good, creative strain.

Most patients find the head high to be very strong, almost dizzying for new users. For new patients, this is a strain to try judiciously as the hit may be overwhelming. But once you get used to it you may end up getting fixated on the buzz of creativity that comes with it. For those accustomed to this high, the effects are spacey and uplifting. This is also associated with an increased focus and creativity.

The couch lock is also one to look forward to. Tijuana will spur your appetite as it also reduces the feeling of nausea. This may be helpful for patients with chronically low appetite. Tijuana is ideal for treating symptoms of depression, chronic pain, fatigue and chronic stress.

It is great for Daytime use as nighttime use may lead to sleeplessness and racing thoughts.

Tijuana is a sativa dominant hybrid that is almost pure Sativa breed that contains upwards of 80% sativa and less than 20% indica. It has high THC content and relatively low CBD content.

Tijuana is a cross between Kali Mist and Original Haze.

Tijuana cannabis strain has a hard hitting cerebral high due to its high Sativa content that will leave you feeling inspired and creative. The hit is very invigorating and uplifting making this an ideal strain for an instant pick me up. Patients have reported feeling instantaneous happiness and enthusiasm after taking this strain. It breaks down inhibitions and makes one social and free. It is great for creativity and inspiration.

Tijuana may be overwhelming for new patients. Some users have reported panic attacks after using this strain for the first time.  Excessive use can also lead to introversion and paranoia. More common side effects include:

Tijuana has relatively high THC levels, which make it ideal for treating pain and inflammation. The cerebral properties are also helpful in relieving stress and anxiety. The body buzz is mild and relaxing and provides reprieve from extreme fatigue, muscle spasms and body aches. The deep relaxation will offer comfort to depressed patients and those with Post Traumatic Stress Disorders (PTSD). Because it stimulates the appetite and combats nausea Tijuana is ideal for cancer patients undergoing chemotherapy.

Terpenes work synergistically with cannabinoids to potentiate the healing effects of this strain. As much as both compounds have their own therapeutic benefits, they produce a more powerful and longer lasting effect when they are combined. This is referred to as the entourage effect.

The piney, citrusy smell exuded by Tijuana indicates the presence of Pinene and Limonene. It also contains caryophyllene, linalool, bisabolol, terpinolene and valencene.

This is also known as levomenol. It smells of chamomile and offers anti- bacterial properties as well as analgesic properties.

This terpene smells of turpentine and acts as a strong sedative. Research has also shown that this terpene has anti proliferative effects.

Valencene also adds to the citrus smell of this strain. It is known for its insect repellent properties.