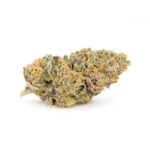 Tillamook Strawberry is a slightly sativa dominant hybrid with a 60% sativa and 40% indica content. It has high THC content of between 25%-26%. This strain was created by crossing the powerful Bruce Banner with the delicious Gobstopper strain. It has a sweet, full strawberry flavor and a smell that is sweet-smelling and fruity with sharp diesel connotations.

The strain’s foliage is deep green with tight buds that are fluffy and small spade-shaped forest green nugs with long thin orange hairs and a frosty covering of amber crystal trichomes. The breeder names this as the “diesel lover’s dream” – it smells like a gas station in a strawberry field.

The Tillamook Strawberry high is very relaxing with a surprising mix of sedation and energy. It induces an energized buzz that increases focus and motivation accompanied by a euphoric lift, which make it a great option for treating mood swings, depression, chronic anxiety and stress, loss of appetite, and inflammation.

The high is uplifting and revitalizing, patients have reported feeling inspired after using this strain. The sativa effects are powerful enough to induce a buzz of elation and creativity. The euphoria is perfect for handling stressful thoughts and undesirable dispositions. First time users may not experience all the positive effects described as THC needs some acclimatization.

Tillamook Strawberry also induces a strong body buzz that causes relaxation without bringing about sedation. This means that this strain can be taken at any time of the day without the fear of falling asleep. Patients have also reported finding significant relief in the treatment of chronic pain, ADHD and chronic fatigue.

This is an Sativa dominant hybrid strain that contains 60% Sativa and 40% Indica. It contains 25-26% THC.

Tillamook Strawberry is a cross between the Bruce Banner and the Gobstopper strains.

The Tillamook Strawberry high is very relaxing combined with a surprising mix of sedation and energy. You’ll feel invigorated at the start of the high with intensification in focus and motivation that go together with the euphoric lift. As this effect blossoms, a slightly soothing feeling will engulf your body, pacifying you into a state of relaxation as your mind becomes clear and focused.

Tillamook Strawberry is a well-balanced strain that comes with minimal side effects. Like most other strains with THC, it will cause blood shot eyes that will clear out after the THC is out of your system. Apart from the inconvenience of this, it is not at all harmful.

The musky smell given off by Tillamook Strawberry bellies the presence of myrcene.

Myrcene gives off a musky scent that may dissuade new patients, especially when it is not masked by other sweeter terpene scents. It is very abundant in most indica strains and is ideal for relieving painful conditions.

This is also known as levomenol. It smells of chamomile and offers anti bacterial properties as well as analgesic properties.

This terpene smells of turpentine and acts as a strong sedative. Research has also shown that this terpene has anti-proliferative effects.

Valencene also adds to the citrus smell of this strain. It is known for its insect repellent properties.