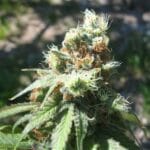 Time Warp is a strain that’s loved by outdoor growers because it takes a short time to grow and gives high yields. It’s one hardy strain that will weather harsh environmental conditions. A grower has nothing more to ask for from this strain.

Time Warp is also known as Texada Time Warp and traces its origins to Vancouver Island in Canada As Well As Texada Island. It is believed that the original Time Warp is only available as a clone-only strain, what you get from seeds is crossed. Along the Vancouver island, users still go for the original strain which they can access through clones.

The exact genetics of this strain is not known, but it’s clear that Time Warp has roots in a Canadian Sativa landrace strain. Other breeders have created versions of this strain, they include Jordan of the Islands, BC Bud Depot and the Next Generation Seed Company.

Time Warp is cut-out for curing anxiety and stress with its deeply relaxing effects. The Sativa effects of this strain result are therapeutic and will help to bring peace and tranquility. With moderate THC amounts, this strain will not cause racing thoughts or induce paranoia in new users. What one is likely to experience is increasing pressure around the temples followed by waves relaxation that sweeps through the mind. In a few minutes, you will begin to experience happiness, excitement and a feeling of being uplifted. You are not likely to tell when the anxiety and stress departed, which is a pretty good feeling.

The effects caused on the body are mild and relaxing. This strain will not cause sedation. Given the balanced effects caused by this strain, it is suitable for day-time use.

Time Warp is an enjoyable strain to experiment with; it has a lemony taste with some berry undertones. Generally, most patients enjoy the smell of this strain. The taste is equally delightful; a taste of lemons will hit your taste buds once you take the first inhale. You will also notice some earthy flavors but they are not overpowering.

The buds are beautiful to behold; with a mix of neon and light green, brown feathery pistils and sparkling trichomes you will be glued on them. By the time of harvest, the trichomes will be milky white and they will be hard to break by hand. It is recommended that you use a grinder to do this; smaller particles increase the surface area for the effective extraction of cannabinoids.

The original breeders of Time Warp are not known. However, this strain originated from Vancouver Island As well As Texada Island. It is established that it originates from a Canadian Sativa landrace strain. Time Warp is popular in Vancouver Island.

Time Warp is an enjoyable strain to try out. Being a Sativa, this strain causes a gentle head buzz that helps to relax the mind and sharpen focus. It also comes with an energizing buzz and a burst of creativity that can be channeled towards an artistic project. The THC levels are moderate, so users are at low risk for getting overpowered by the high. However, the sense of euphoria that is produced is as exhilarating as ever; you will be transformed into a social butterfly instantly.

On rare occasions, patients have complained of anxiety after taking this strain.

Patients have reported that Time Warp can treat the following medical conditions:

Time Warp can be taken at any time of the day, this makes it an ideal medicinal strain. Patients have used this strain to get relief from stress and symptoms of depression. The mood-uplifting effects can help one achieve stability when they are struggling with feelings of desperation or lack of positive energy.
This strain is good for stimulating the appetite. This effect is desirable for people with chronic illnesses who need the motivation to eat. Time Warp further prevents nausea and vomiting, making it essential in the treatment of chemotherapy-induced N&V.

Time Warp is known for its citrus appeal which betrays the presence of d-limonene. D-limonene is found in the rind of citrus fruits such as oranges, mandarins, limes, and grapefruit. It is commonly used in food flavorings as well as sanitizers.

D-limonene is a fat emulsifier, due to this it can be used to stimulate weight loss. It also has cardioprotective properties. It has anti-bacterial properties that make it a useful ingredient in hand sanitizers.