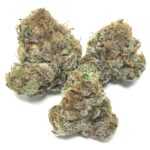 The “9lb” Hammer is an  indica strain which is a cross between three legendary strains namely; Jack the Ripper, Goo Berry, and Hells OG. This strain was developed by Jinxproof Genetics for the renowned seed marketing company TGA Subcool seeds. The “9lb” Hammer buds have a high level of THC ranging averagely from 18-23% which leaves you feeling like you were hit on the head with a hammer. Users of this strain describe its high as having an instant feeling of euphoria and happiness and also a boost in cerebral activity which relieves pain and stimulates the body. These effects are as a result of the indica in the 9lb Hammer strain.

The ideal place of growth for the “9lb” Hammer Strain is indoors and they yield heavily blooming between 50 and 60 days and the best method to grow this strain is the dense bud production method. It is advisable you top this strain early in order to create a round bush.  The strain takes the form of dense buds, coated in resins, which gives them lime and sweet grape flavors. The phenotype which stands out the most in the “9lb” Hammer strain is the Goo Berry phenotype.

The “9lb” Hammer strain is known to have both positive and negative side effects when smoked. Outlined below are some of these effects which have reported by its users.

Consumers of the “9lb” Hammer strain describe its high nature to be a sudden outburst of euphoric, happy and uplifted feelings which relieve pain and stimulate the whole system. The smoke from this strain has a smooth feel with candy residue which tantalizes the tongue in a soothing way. It is advisable for you to smoke the “9lb” Hammer only in the evenings and you should be an experienced smoker as it packs a punch which will put you to sleep immediately.