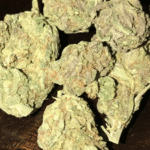 Berry White is a powerful indica hybrid strain, being among the few hybrid strains to boast of 100% indicaness. It is the offspring of two popular cannabis strains: Blueberry and White Widow. Blue Berry is popular for its balanced effects that offer deep relaxation combined with a mild sense of euphoria. White Widow, on the other hand, is one of the World’s famous cannabis strains- some have described it as, “they call it White Widow because, after 3 hits, you’re going to want to clean your house.” With the powerful genetics from its parents, Berry White is attracting attention from all quarters in the cannabis space. It is a go-to when one is seeking inspiration to engage in creative pursuits. The THC varies between 19% – 25%.

Berry White buds are very beautiful to behold, the green is immersed in blue hues while a thick layer of frosty trichomes gives them a sparkling appeal. In case you expected all white buds, you will wrong but definitely not disappointed with what you find.

Being all indica, Berry White gives a powerful body hit that will feel like getting a full body massage. The relaxing effects are accompanied by a mild rush of cerebral stimulation and invigorating effects. The gentle full-bodied experience will make you feel light and fuzzy on the inside. You can enjoy this strain at any time of the day.

Berry White is one aromatic strain. It boasts of enticing fruity scents mixed with earthy berry tones that linger. The sourness is well masked by the sweet, so you likely to be left salivating for more. It’s good that the taste is not far from the smell; sweet-tasting tropical flavors with a little spiciness added.

In large doses, Berry White may make you drowsy enough to want to sit down. However, it rarely causes a couch-lock effect.

This is an indica hybrid strain with 100% indica genetics. It has 19%-25% THC. The high THC level is offset by a moderately low CBD level of approximately 0.1%.

Berry White is a cross between White Widow and Blue Berry Strains. It was created by Green Beanz, accidentally, as they had their eyes on a bigger “project.” Having come up with this strain as a stepping stone, Green Beanz abandoned the project having being impressed by this powerful strain that had emerged- Berry White.

Some people wonder if Berry White strain has anything to do with the famous soul singer Barry White. For as much as we know, the similar name is just a coincidence.

Patients have experienced the following negative effects after taking this strain:

As Berry White has quite a high THC level new patients may find this particular strain too strong and complain of dizziness, increased anxiety and paranoia.