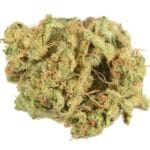 Durban Haze is a menacingly-named sativa strain, made from the powerful strains Durban Poison and Haze. It is a pure sativa strain which gives an insanely relaxing and uplifting head high, with an average THC content of 21%. Some samples have a reported THC content of 24%, which makes the strain very potent.

The strain is known to induce relaxation in its patients after just a few doses. It is very potent in the treatment of conditions like nausea and migraines and can be used to combat stress in its users. The strain is also known for its strong intensity but short duration of effects, with peak effects achieved in 15-30 minutes after dosing. Patients describe doses of the Durban Haze hitting them with an insanely fast onset of euphoric psychoactive head high with bursts of energy. Some users report a head-rush and a feeling of pressure on the chest after a few doses, while some experience fits of uncontrollable giggles and a voracious appetite once the effect begins to wear off. It also allows the patient to have high levels of creative freedom and focus, without causing burnout in users.

Some users prefer the strain because it helps them plow through boring activities without any physical weigh-downs. And because of its social and euphoric effects, users prefer the strain when going out as it allows interaction and chattiness. The focus also helps people dealing with Attention Deficit Disorder focus on individual tasks and finish up before moving on to the next task.

The exact origins of the strain are unknown, but it is very popular in Georgia around the Decatur and Valdosta area. The strains can be grown indoors or outdoors, needing a hot and semi-humid climate when grown outdoors. Durban Haze is known for its flowers with an elongated, tapered shape, leaves with a pale green color, twisted through with dark orange and yellow pistils. The flowers are usually covered in trichomes, making them sticky when touched.

Durban Haze is a 100% sativa strain made from crossbreeding two pure sativa strains, the Durban Poison and Haze.

Patients who consume the Durban Haze strain of medicinal marijuana have reported both negative and positive effects when using the product. Some common and some rare.

Commonly reported side effects of consuming Durban Haze as reported by patients include the following:

While the strain is very useful in treating depression and associated conditions, regulation of doses should be carefully adhered to when dealing with patients with a history of anxiety or paranoia. This is because the rapid onset and strong intensity of its effects, may exacerbate episodes in people with anxiety and paranoia. It is also known to sometimes increase cases of insomnia in some users, cause dizziness, headaches, and nausea. This means the strain is not for everybody, and potential users need to try it out, or weigh its potential benefits against the cons before using the strain as a treatment for their conditions. On the other hand, its anti-inflammatory properties may help with cramps, and upset stomach. Patients report the Durban Haze strain helps with:

Durban Haze is known for its characteristic and unmistakable scent of fresh orange, lemon and berry, with a light earthy herbal undertone and slightly sour citrus flavor when burnt. Limonene is known to be present in considerable amounts in the strain, which is responsible for its citrusy smell and the mood-improving properties of the strain. Limonene is also responsible for stress relief, depression and heartburn treatment, and antifungal and antibacterial properties which makes the strain useful in treating certain conditions.

The Camphene present in Durban Haze is also partly responsible for its herbal undertone, has been proven to possess anti-inflammatory and antibiotic characteristics, while the Linalool content of the strain has proven to be an invaluable tool in reducing stress and depression. Camphene, which has been used for its antifungal properties for centuries, is also present in the strain and is responsible for the strong herbal aroma and ‘peppery’ feeling described by users of the strain.